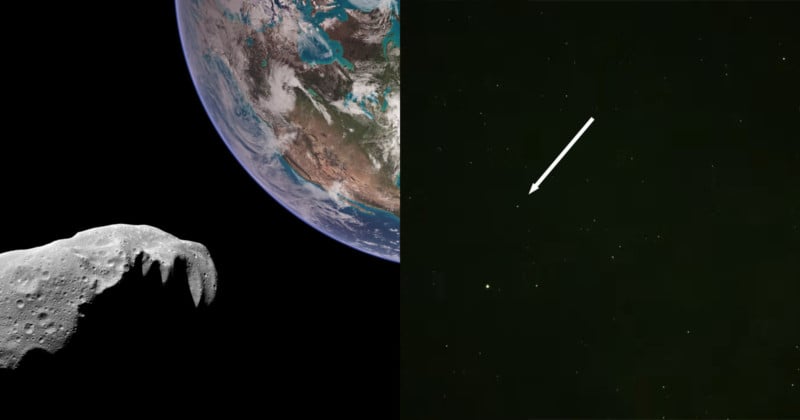 A massive and “potentially hazardous” asteroid measuring 0.68 miles (1.1km) wide flew past the Earth at over 43,000 miles per hour on Tuesday. Photographer Andrew McCarthy managed to capture real-time footage showing what the flyby looked like in the night sky.


“Whew, that was a close one!” McCarthy wrote after the event. “Thankfully the giant asteroid you may have heard about missed Earth today, coming a mere 1.2 million miles from our planet on its closest approach.

“That distance sounds far in human terms, but in cosmic distances, it’s actually a pretty close one!”

Just for reference, the average distance between the Earth and the Moon is about 238,855 miles, so this asteroid zipped by about 5 lunar distances away.

How the Asteroid Flyby Was Captured on Camera

McCarthy had his telescope and camera set up in Florence, Arizona, during the flyby on January 18th and decided to try his hand at capturing it.

“I’ve never photographed a near-Earth asteroid before, and I was setting up for my latest transit shot anyway so tried to look for it,” the photographer tells PetaPixel. “It was super cloudy, so I wasn’t able to properly align my scope the way I usually do to find objects.

“Instead, I used an app on my phone to find where the asteroid was supposed to be in the sky, and just eyeballed my scope’s orientation to try and find it.”

The advanced night sky app on his phone came in handy.

“I didn’t think I would be able to, but I found it on the first try,” he says. “It was so bright I was able to create a real-time video of it, something not usually possible with objects like this.”

Here’s the real-time video McCarthy managed to capture while he had his telescope locked onto the asteroid:

“Unfortunately, clouds covered it pretty quickly, forcing me to try and find the object again after they cleared, but I couldn’t,” the photographer says.

“I was surprised at how fast it was moving,” McCarthy says of the asteroid. “I had to constantly slew the telescope to keep it in frame.”

Another View of the Asteroid Flyby

Italian astrophysicist and astronomer Gianluca Masi also captured footage showing a closer view of what the asteroid looked like through the Virtual Telescope Project, which he founded.

Launched in 2006, the Virtual Telescope Project is a part of the Bellatrix Astronomical Observatory in Italy and uses several robotic telescopes that can be reserved and remotely controlled in real-time over the Internet. Over a million people observe the night sky every year through the Virtual Telescope.

The asteroid that flew by was discovered by Scottish-Australian astronomer Robert McNaught on August 9th, 1994, and it was given the name 1994 PC1 (7482).

It has been classified as a dangerous asteroid due to its path and size — it is longer than 10 football fields — but astronomers had concluded that it would safely pass by Earth at a distance of 1.2 million miles prior to the flyby.

Here is an animation showing the path of the Earth and asteroid through the 2022 flyby:

1994 PC1 is not expected to get this close to Earth again for another 83 years, when it should make another flyby in January 2105.

You can find more of McCarthy’s astrophotography on his website and Instagram. You can also support his work by becoming a patron through Patreon.