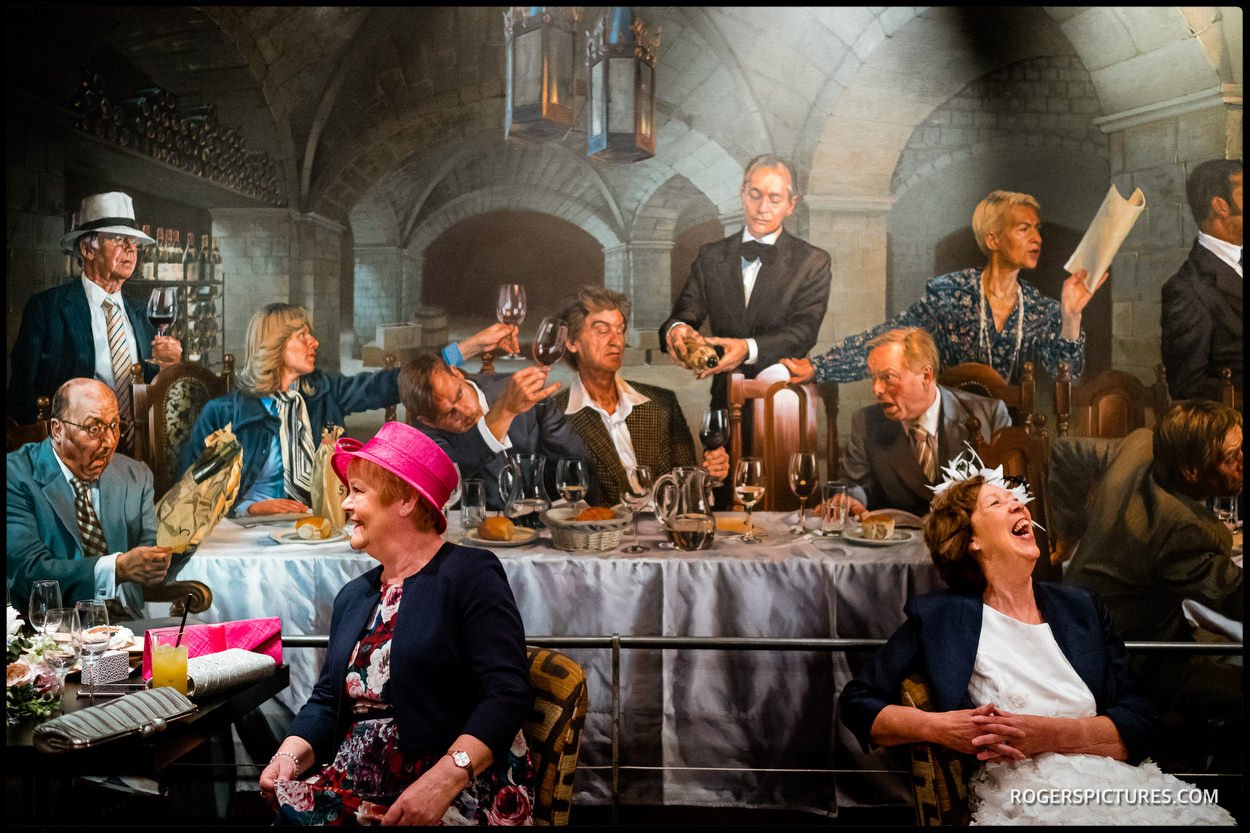 This is an unposed, naturally caught moment at Rachael and Carl’s wedding at The Vineyard in Stockcross, Berkshire. It’s recently won a couple of awards from This is Reportage and the Wedding Photojournalist Association. It’s a striking image, and drew some criticism that it must be staged, or was not photojournalism. So I thought I’d explain why I believe this is wedding photojournalism, and how I came about taking this image.

The Vineyard is a 5-star hotel and wedding venue that prides itself on it’s AA Rosette restaurant and award winning 30,000 bottle wine cellar. There’s original artwork everywhere, and this amazing painting, The Judgement of Paris, by Gary Myatt features prominently. It shows the famous 1976 competitive tasting of French and Californian wines in Paris, and depicts the moment the French tasters discover they’d all chosen the Californian wines. 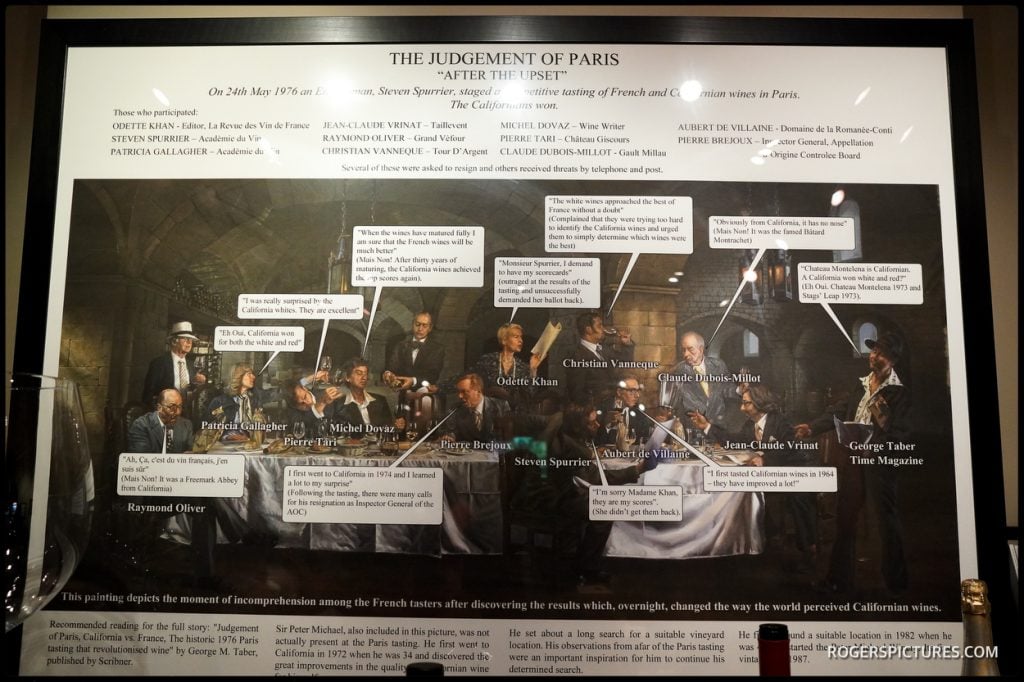 At every wedding, I always have a walk through the venue and identify interesting features or great light where I might look for compositions later in the day. Crucially, as a documentary wedding photographer, I don’t ever pose guests or couples or set pictures up at all (except for the portraits and group photos). It’s a strong belief of mine that this makes much stronger images, and gives a true depiction of what it was like to be at that wedding on that day.

I’d made a note of this painting, hoping I could blend some guests into the foreground later in the day.

Frame The Subject. And Wait

So during the drinks reception, I positioned myself square on to the painting, and watched and waited for the right moment. I do this kind of thing a lot at weddings. Sometimes the image happens almost instantly, and I can move on to the next shot; other times, I might have to come back to it several times and wait a long time before the composition works. Often it never comes off, and I just move on.

At first, the Bride sat on the far left hand side of the painting. Almost perfect, except she was facing out of the frame, talking to someone out of shot. Shoot Through The Moment

Then the Brides Mother (in the pink hat) sat opposite her, and I photographed her for a while from behind the Bride before returning to the square position, just as the Grooms Mother sat in the other chair. I adjusted my framing just in time as the Groom’s Mother reacted to the conversation and I got this image. I stuck with it a little longer, but knew that this was what I’d been waiting for.

I’d waited 8 minutes from photographing the Bride at the far left through to moving on to the next image. I’d taken 139 images. This is not photojournalism. It’s not impartial. My clients are the Bride and Groom, and I have a commercial business to run, so I need my clients to love their pictures, and love how they and their guests look in them. It’s still wedding photography, in a photojournalistic style – ie unposed and with synergy.

In contrast, in my mind photojournalists report events without comment. They give an unbiased representation of what happened. Documentary photographers start to blur this area. You could argue that all artists have an agenda, and even news photojournalists have a paying client to keep happy – newspapers and magazines have editors who have political beliefs and that’s often reflected in the content. And an uncommissioned documentary photographer at a wedding will have their own agenda, their own message that their work is trying to give.

So wedding photojournalism and documentary wedding photography takes the honesty and authenticity of their news gathering counterparts, and produces a record of the day that the Bride and Groom will love.

I spent 20 years as a news photographer at The Times in London learning how to tell an impartial story in photos. I now love using those skills to beautifully record couple’s wedding days, through my eyes, with my opinion. That’s what I term wedding photojournalism.

About the author: Paul Rogers is a photojournalist based out of Hertfordshire, England. He worked as an editorial photographer for The Times in London for 20 years before applying his talents to documentary wedding photography. To see more of his work, visit his website or give him a follow on Instagram, Facebook and Twitter. This article was also published here, and is being republished with permission.