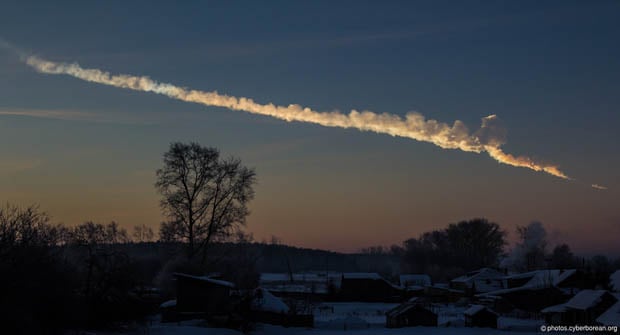 One of the major international news stories today is the fact that a meteorite streak across the sky in central Russian today, causing an explosion and shock wave that injured over 1,000 people. It was the largest meteor reported since 1908. The event was well documented, as many Russian drivers had dashcams rolling as the event unfolded.

Here’s a dashcam video that captured the entire flight of the meteor as it illuminated the sky:

As dashcam videos of the meteor started pouring into the Interwebs, compilations began appearing. These offer a glimpse into what happened from all different angles and distances:

One man who had his handheld video camera rolling at the even managed to capture the gigantic explosion that happened over Chelyabinsk — a blast that was nuclear-like in its intensity:

You might be wondering why there were so many dashcams rolling in Russia when this event occured. The reason is that drivers there want to protect themselves against the widespread problem of insurance fraud. Marina Galperina of ANIMAL writes,

Dash-cam footage is the only real way to substantiate your claims in the court of law. Forget witnesses. Hit and runs are very common and insurance companies notoriously specialize in denying claims. Two-way insurance coverage is very expensive and almost completely unavailable for vehicles over ten years old–the drivers can only get basic liability. Get into a minor or major accident and expect the other party to lie to the police or better yet, flee after rear-ending you. Since your insurance won’t pay unless the offender is found and sued, you’ll see dash-cam videos of post hit and run pursuits for plate numbers. [via]

That’s why the Internet is teeming with videos of Russian car accidents and close calls. We’re not complaining though, since it led to what is likely one of the most well documented meteors in history.

There Are Giant Camera Resolution Test Charts Scattered Across the US

Portraits of a Daughter in the Style of Old Master Paintings