Earlier today, we shared a time-lapse put together by an amateur storm chaser that captured 10 tornadoes touching down in Minnesota over the course of one chase. But time-lapses come in a few different varieties.

There are the ones that manage to turn an hour of footage into about 5-minutes of excitement — like the tornado time-lapse. And then there are majestic time-lapses that capture some of the most stunning vistas you may never have the chance to visit in person. Doug Urquhart and Paul Zizka’s short film “Mountains in Motion” falls squarely into that second category, and it’s got the film festival awards to prove it. Hours and even months of change lapses in a matter of seconds, providing the viewer with a rare insight into the ever-changing nature of the landscape. Weaving throughout the film are reflections of an early mountaineer, who is deeply moved by his own encounter with the mountains and the revelations of explorers who have come before him. “What is this power that lures me upwards, into the unknown,” he wonders, “that pulls me deeper, despite snow, wind and exhaustion?”

Made on a shoestring budget and with entirely volunteer hours, the film brought together artists from two vastly different parts of North America – Banff, Alberta, and Atlanta, Georgia. Strangers at the start, the film team developed strong friendships over the course of production and were united by their common goal of capturing the beauty and essence of a place that inspires them every day.

This 100% human-powered film combines advanced time-lapse photography with an original story and musical score to bring the landscape center-stage and offers a thrilling new perspective that re-establishes the Canadian Rockies among the finest mountains in the world. 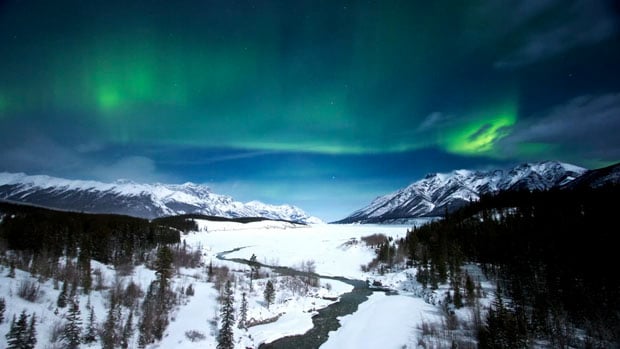 This is one video has to be watched in full-screen HD, with the sound up and the lights down (scaling off, please). Multi-month time-lapse footage of frozen landscapes, striking blue lakes, incredible sunsets and aurora borealis all await on the other side of that play button.

Since a picture is worth more or less one thousand words, and the time-lapse footage in Mountains in Motion is made up of several thousand pictures, we’ll let the video do the remainder of the talking. But if afterwards you want more info, you can check out a full album of behind-the-scenes photos over on Flickr.