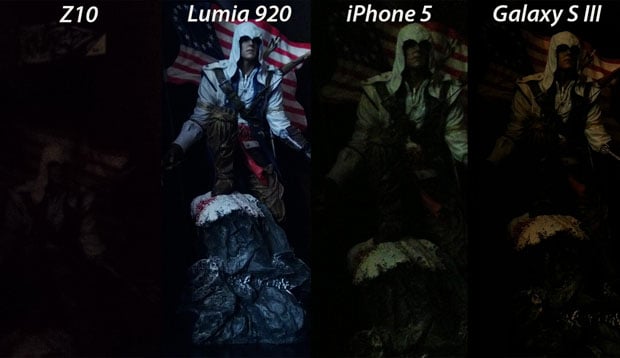 The company formerly known as RIM changed its name to Blackberry yesterday, and launched a new flagship smartphone called the Z10. While the the phone is getting decent marks among reviewers, one weakness is sticking out as a sore thumb: the camera’s low-light performance. Gizmodo writes,

The Z10 didn’t even hold the dimmest, most-pathetic light to the other cameras in our test. Look at that photo above on the left. It is an abject and miserable failure. Because this is a particularly difficult shooting setting, all of the photos have problems with noise, distortion, and detail, but we’ve haven’t seen something so crummy as the Z10 in a long time. The Z10 even has a “night” setting that was completely useless. This is some four-years-ago crap.

It’d be interesting to find out who Blackberry chose as the supplier of its camera sensor.