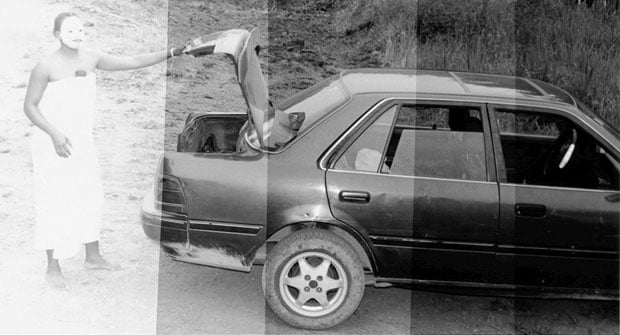 One would hope that the medium of photography was immune to racial prejudice, but an exhibit by London-based artists Adam Broomberg and Oliver Chanarin shows that this was not always the case. The artists’ exhibit, on display at Johannesburg’s Goodman Gallery, explores the marks that racism left on early color photography.

The film was some of Kodak’s old stock with such a narrow light range that, according to Broomberg, “if you exposed film for a white kid, the black kid sitting next to him would be rendered invisible except for the whites of his eyes and teeth.”

The camera was a vintage Polaroid ID-2, famously protested against in the 1970s until Polaroid finally withdrew from South Africa. It featured a boost button that would boost the flash exactly 42%. Black skin reportedly absorbs about 42% more light. To Broomberg, the connection seems fairly clear-cut.

Using the camera’s boost ability, South African officials were better able to photograph the victims of apartheid for the infamous passbooks used to keep tabs on them.

The exhibition goes into more detail that we have room for here, pointing out other instances of racism in photography, including its title “To Photograph the Details of a Dark Horse in Low Light” — a code phrase used by Kodak to describe their new film that could expose a broader light range.

If you’re interested in learning more or seeing how the photos turned out, check out the exhibit’s page over on the Goodman Gallery website.