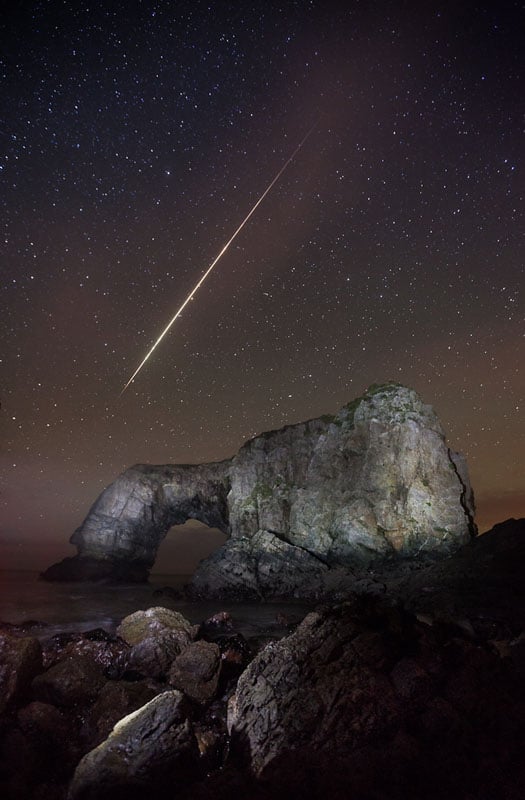 Walkthroughs of photographs that aren’t easily reproducible (or are impossible to reproduce) might not be very useful to many, but it’s still interesting to learn how rare shots come about. An example would be the photograph above, captured by photographer Bryan Hanna last week. Hanna was aiming to capture a long-exposure nighttime photograph of a landscape in the foreground and the night sky in the background, but he accidentally snagged something even better: a fireball zipping across the sky in just the right area in the frame!

Here’s Hanna’s story of how the photo came to be:

I and another photographer (Brendan O Neill) went to The Great Pollet Arch in Donegal up the very north of Ireland last Wednesday night. We planned to get a shot of the sea arch with the Milky Way in the background, but it turned out we weren’t there at the right time for that.

The tide was out so we had to scramble over very slippy rocks to get out far enough to get a good shot of the sea arch. When we got into place, we both realised that we weren’t in a safe spot, the sea pounded in front of us and we were afraid the tide would come in behind us and cut us off from the only way up from the rocks.

We knew that we wanted to get a shot and get out of there as fast as possible. We both set up our camera gear, set our camera setting and started taking a few exposures. The other photographer lit up the sea arch with a LED torch as we both took long exposures.

During one of our last shots as we were waiting for an image to expose, something that looked like a shooting star crossed the sky. It continued to grow much brighter with what looked like a red trail coming out the back of it. We had seen a fireball!

We quickly checked to see if we had captured it and scrabbled back up the rocks to get back to safety. Looking back at the metadata of my images we were only taking pictures for 7 minutes, we were extremely lucky to capture such a sight.

You can check out a higher-resolution version of the photograph here.

Image credits: Photograph by Bryan Hanna and used with permission

Hands on with the Pentax MX-1, the Latest Horse in the Retro Camera Race