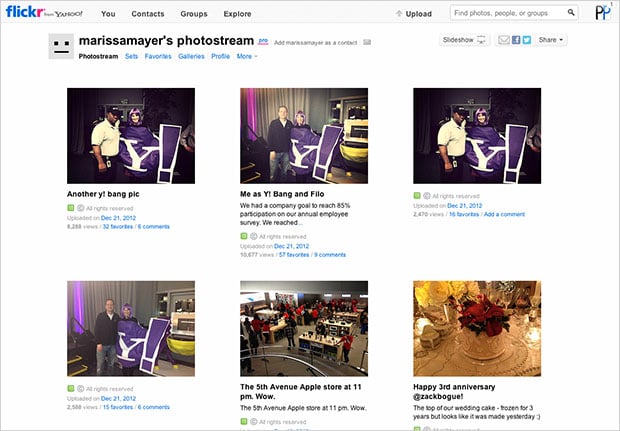 When it comes to the Marissa Mayer/Yahoo!/Flickr love triangle, a little timeline of events is always helpful. So first we had Marissa Mayer, Google’s 20th employee, take over as CEO of Yahoo! after several other people over the course of 12 months just couldn’t cut it. It was around that time that the #dearmarissamayer movement began, with the message “Please Make Flickr Awesome Again” at the top of its list.

Mayer and Yahoo! wasted no time; the next day they responded with a call for employees and their own plea: “Come Help Us Make Flickr Awesome Again.” And it seems they meant it. Since then the Flickr team has doubled in size, and Mayer herself created an account (a real one, not the fake one that popped up in August), showing her Flickr team some love that they never received from either of their previous two CEOs.

Finally, we’re up to now, and the Flickr support (both literal and moral) from the head honcho continues: ever since Flickr released its revamped mobile app a couple of weeks ago, Mayer has actually been using it, ditching her Instagram account.

Since she’s only had 12 days to play with the app there aren’t many uploads, but visiting her photostream will still give you a chuckle. The majority of the content consists of her dressed up as Yahoo!’s “bang” (the exclamation point), the result of a bet she had made with her employees as motivation to complete a company survey.

It may not be on many people’s Christmas lists, but if you were looking for a way to keep up with Yahoo!’s CEO and see how a woman getting paid $71M for her work spends her days, a way has been made. And while you’re at it, who knows, you might like Marissa’s garage better than Craig’s (you know, the one Mark bought).