Update: The account has mysteriously vanished from Flickr. This suggests that it was either fake, or something that wasn’t meant to be as big of a news story as it was. 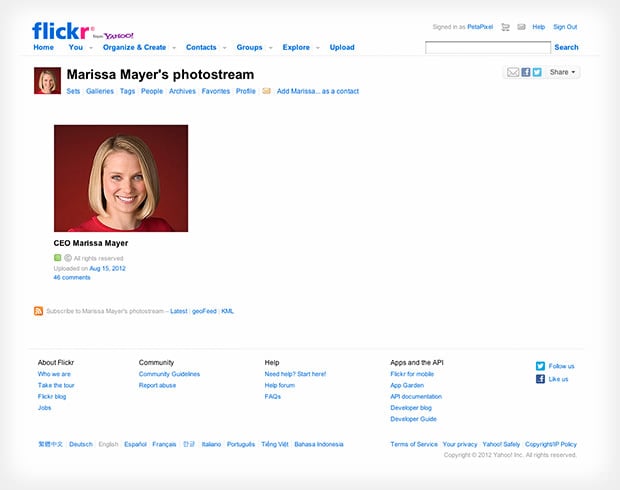 If you’re a fan of Flickr, then you’ll be happy to know that new Yahoo CEO Marissa Mayer has apparently created an account on the photo sharing service. Granted, the page only features a single portrait of Mayer from her days as a Google exec, but it’s an important first step. Neither of Mayer’s two predecessors (Scott Thompson or Carol Bartz) bothered to join the service.

It doesn’t end there: according to Robert Scoble, Mayer has doubled the size of the Flickr team in just the past week. Apparently the Internet attempts to get Mayer’s attention is working, and Yahoo’s humorous response wasn’t simply a clever PR stunt.

Earlier this year, Yahoo was criticized for handing pink slips to “the highest level of Flickr’s customer support” — people who “loved the site the most”, so it’s awesome to see that the company is now hiring instead of firing, and devoting attention and resources to ensure that the service thrives.

Hopefully Mayer will start sharing some of her photographs as well!