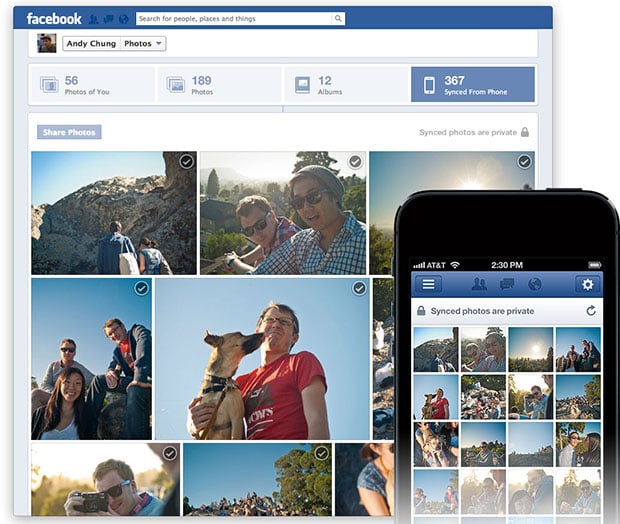 Today Facebook finally launched the photo sync feature that it has been privately testing for smartphones over the past couple of months. The feature is built into the social network’s official mobile app for Android and iOS, and makes it easier to automatically sync your phone photos to the Facebook cloud.

Images that are beamed over to Facebook’s servers (up to 2GB worth) are available in a private album in your Facebook account. You can then select the ones you’d like to share with the world.

You can download the latest version of the Facebook app from Google Play or from the iTunes App Store to try it out for yourself.

To turn syncing on (you’ll need iOS 6 if you’re on an iPhone), simply visit your photos app, tap Photos, tap Sync, and then follow the instructions.

If you’re on a tight data budget, the good news is that there are a number of sync options for specifying how the data is sent:

We generally try to sync your photos as soon as you take them. However, we also take into account a number of factors, such as your battery level and sync settings. New photos that you take will be privately synced as you take them. In your syncing settings, you can choose to sync over Wi-Fi and your cellular network, sync or over Wi-Fi only, or turn syncing off entirely. You can also choose to sync all photos in your camera roll over wifi and see how much storage space you have available. [#]

So as with many other apps and smartphone features, you can choose to have it only sync over Wi-Fi if you’d like to save your data plan for other purposes.

Facebook is already the web’s largest photo sharing service. Automated photo transfer will only help the company secure its lead in the space.