Check out this curious 25-second time-lapse/composite video that shows every airplane that landed at San Diego International Airport on Black Friday a week ago between 10:30am and 3pm. The giant planes whiz by overhead as if they’re part of a fighter jet squadron heading off to battle — not something you’d expect to see with commercial planes at an airport. It was created by photography and film professor Cy Kuckenbaker.


He came up with the idea after seeing this composite photo that we shared a while back, created by Ho-Yeol Ryu at Hannover Airport: 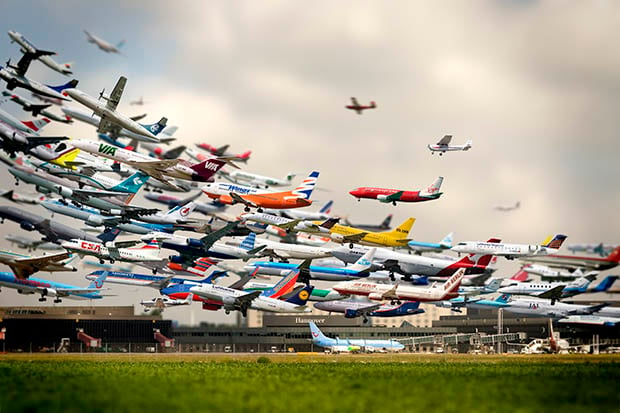 Here’s what Kuckenbaker tells us about how his project came about and how it was created:

I moved to a new neighborhood in San Diego a little over a year ago that put me close to the San Diego Int. Airport. Since then I have become increasingly interested in the rhythms of the airport and the airplanes themselves. San Diego has an unusual flight path that brings the planes in low right over the center of the city and they have to drop rapidly behind a hill to make the runway. When I saw a composite still image on PetaPixel of every airplane that took off in a day from a European airport I started to wonder if I could do something similar with video. The concept is simple: shoot the individual planes flying across a pure blue sky, then chroma key the blue out as if it’s a green or blue screen leaving only the plane behind. Then put them all together on a video timeline. I did some tests and discovered that it didn’t work well if there were trees in the edges of the frame so scouting good locations took the most time. I watched the weather for a cloudless day then sat in a park and shot every plane that flew over. I locked the camera (Canon 7D with a EF-S 17-55 f/2.8) on a tripod and shot the planes with 1080p video at 24fps with an exposure I’d tested the day before (50/s, f/13, ISO 100) that would keep the sky deep blue with no blowout for a good chroma key.

To give the video a sense of temporal change as the planes fly by I did an 8 hour time-lapse under a bridge nearby shot at the same angle and composited it over the planes. Without it there’s no sense of time passing. I used an intervalometer to shoot about 800 images with the same exposure as the video. Once I had it posted as a regular video clip, I keyed the sky out of it as well. I put everything together in Adobe Premiere, which challenged my system since I needed 40 video tracks to stack all the airplane clips together. The last piece was to put a new sky back in — a still image with depth and clouds that’s panned using key frames in Premiere.

Here are three images showing the individual components that went into making the video: The tiny plane trailing all the larger jets at the very end is a pretty funny touch.

P.S. We shared a different time-lapse video a month ago that made approaching jets look like wobbly toys in the sky. You should take a look at that one too if you liked this one.

Image credits: Video and photographs by Cy Kuckenbaker and used with permission