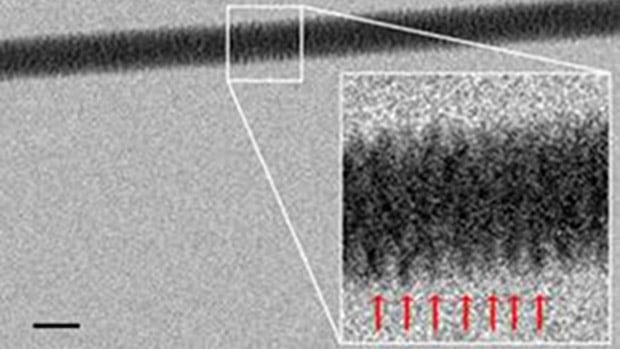 An interesting photographic first has been announced by a scientist at the University of Genoa in Italy. Enzo di Fabrizio revealed the world’s very first true photograph that shows the double helix structure of DNA, shown above.

Di Fabrizio and his colleagues developed a new technique of imaging the molecules, which contain genetic instructions and are used by all known living things for development and functioning.

Prior to the scientists’ breakthrough, which was published in the scientific journal Nanoletters, DNA’s double helix structure could only be detected by scattering X-Rays off atoms in DNA with a technique known as X-Ray crystallography. Di Fabrizio’s method uses a scanning electron microscope, which, as its name suggests, involves scanning the tiny subject with a focused beam of electrons.

Here’s the technical low-down of their technique, according to Roland Pease of New Scientist:

The trick used by Enzo di Fabrizio at the University of Genoa, Italy, and his team was to snag DNA threads out of a dilute solution and lay them on a bed of nanoscopic silicon pillars. The team developed a pattern of pillars that is extremely water-repellent, causing the moisture to evaporate quickly and leave behind strands of DNA stretched out and ready to view. The team also drilled tiny holes in the base of the nanopillar bed, through which they shone beams of electrons to make their high-resolution images.

The hope is that with some further tinkering, this technique will allow scientists to photograph single strands of DNA interacting with other molecules.

Thanks for sending in the tip, Luke!

Review: Fujifilm X-E1 is Both a Beauty and a Beast