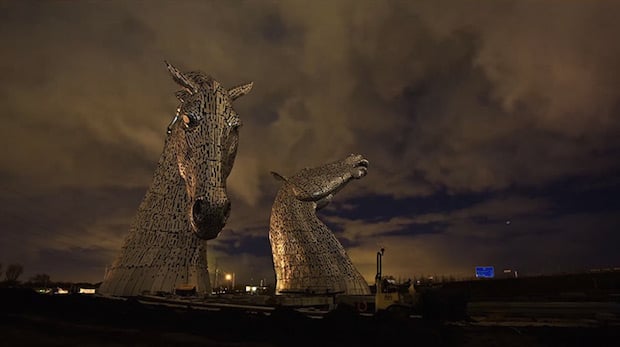 Andy Scott‘s dramatic ‘Kelpies‘ sculptures near Falkirk, Scotland are only a week away from their official unveiling, which prompted Helix to unveil one of the most epic construction time-lapses we’ve ever seen to show the massive 100ft sculptures come to life.

A kelpie, for those who aren’t familiar, is a supernatural water horse from Celtic folklore that, according to our friends at Wikipedia, “is believed to haunt the rivers and lochs of Scotland and Ireland.”

These massive sculptures aren’t going to be haunting anything… at least we don’t think they are… but they do have a haunting, menacing quality to them that will surely attract tourists from all over the world to gaze upon the gorgeous art installation.

Here’s the construction hyperlapse from Helix. Only the first half covers actual construction, the second half (starting at about 3:00) consists entirely of beautiful shots of the completed works:

And if that video isn’t enough, here is some (slightly shaky) aerial footage courtesy of YouTube user scottishmotorman and a gorgeous, calm spring evening:

If you happen to be in the area, the final sculptures will open up for public viewing officially on April 21st. For more info on the sculptures themselves or to browse through Scott’s entire portfolio, head over to the official Kelpies website by clicking here.

Thanks for sending in the tip, Mike!