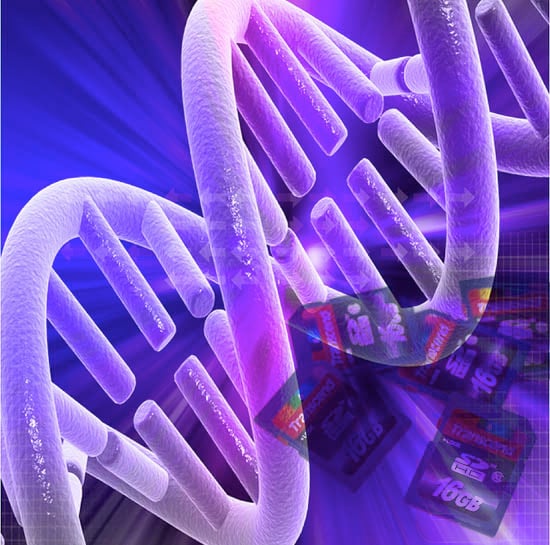 Could memory cards and hard drives one day store massive numbers of digital photographs on DNA rather than chips and platters? Possibly, and scientists are trying to make that happen.

Last year, we reported that a group of researchers had successfully stored 700 terabytes of data on a single gram of DNA. The data being stored that time was a book written by one of the geneticists. Now, a new research effort has succeeded in storing something that’s a bit more relevant to this blog: a photograph.

British scientists announced last week that they had succeeded in storing 739KB of digital data onto a speck of DNA that’s barely visible to the human eye. Besides a digital photograph, the speck was used to store all 154 Shakespeare sonnets, a scientific paper PDF, and a 26-second audio clip from Martin Luther King’s famous “I Have a Dream” speech.

The storage technique involved converting the binary code of the files into the “four-letter alphabet” of DNA, creating strands of synthetic double helices. Afterward, the DNA strands could be decoded with 100% accuracy.

Scientists believe that DNA could be used to preserve the entirety of humankind’s stored data in a pile of DNA that could fit in the palm of your hand. The data could then be frozen and preserved for potentially thousands of years… without any electricity required for stable storage.

The main challenge going forward would be to reduce the costs (both time and money) of encoding and decoding the DNA strands. However, you probably shouldn’t get your hopes up for DNA-based memory cards in the near future: even if the technology hits the consumer market, it will likely be used for uber-long-term storage rather than on-the-go purposes.

Imagine being able to store your precious photographic memories (e.g. wedding photographs) safely for your entire life on a drive you can barely see. It’d likely be both smaller and more stable than any of the at-home storage strategies we use today.

How to Turn Your Satchel Bag into a DIY Camera Bag