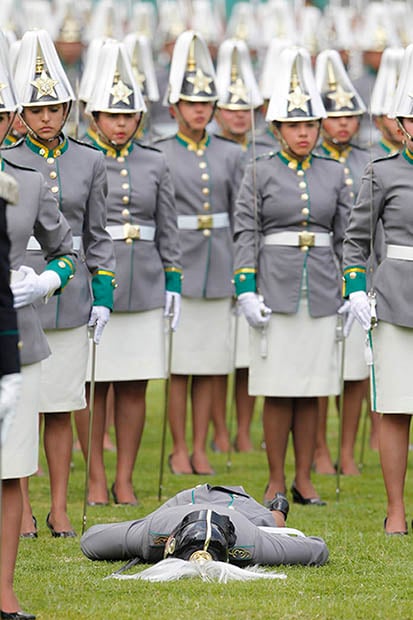 Reuters photographer Jose Miguel Gomez was recently covering the 121st anniversary of the National Police in Colombia when he spotted a cadet lying face down amidst her peers. He photographed the apparently unconscious policewoman with his 400mm lens for five minutes before she was finally carried away, and wondered why it took so long for help to arrive.

The photographers at the event were instructed afterward not to send the photo, but they disregarded the request. Gomez writes,

Days later I heard that the fallen cadet wanted to quit the force, [but] the generals didn’t accept her resignation. She considered herself a victim and expected others to side with her protest, even though this kind of thing happens everywhere. After what was otherwise a very boring ceremony, a striking photo of her on the ground in a forest of legs fronted the next day’s national newspapers, ready to provoke either jokes or compassion in a country immersed in its own war for several decades.

Update: We had originally written that the policewoman had been protesting by lying face-down in the grass. This was incorrect, and the woman had actually fainted, and had wanted to quit the force after a photo of it became widely published.

Comparison: The Canon 6D Next to the 5D DSLR Lineup