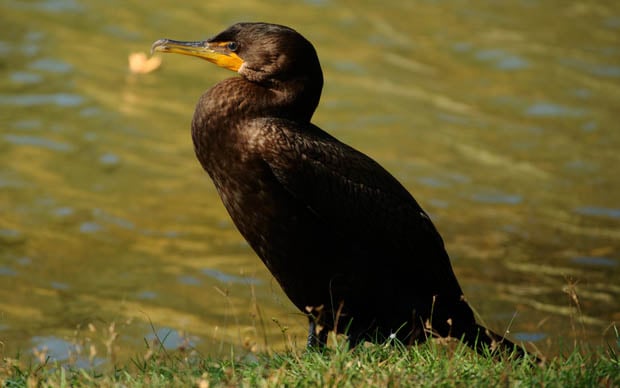 A Canadian woman named Karen Gwillim was driving through the village of Craven, Saskatchewan back in September when she came across a cormorant (perhaps like the one above) standing in the middle of the road. Seeing that it was struggling, Gwillim got out of her car to take a closer look, and found that there was a silver digital camera hanging from the bird’s neck. After taking the camera off — or stealing the camera from the bird, depending on how you look at it — Gwillim took the gear home to investigate.


Once she had removed the SD card from the point-and-shoot camera and dried it out, she stuck it into her card reader to see if it was still readable. Lo and behold, there were 239 photos preserved on the card, with many of them showing a group of guys holding up big fish while on a fishing trip. Gwillim decided to seek out the camera’s owner by posting the photos online to her Facebook profile: I found a camera attached to a cormorant (bird). The camera is rather broken but the SD card still worked. It may have been lost as long ago as October of 2011 around Last Mountain Lake. Does anyone recognize these people?

After a few weeks of no leads, Gwillim was interviewed on television yesterday by Craig Lederhouse of CBC Afternoon Edition. This interview caught the eye of a man named Frank Resendes, who’s seen in some of the photos. Resendes tells CBC News that the owner had dropped the camera into a canal about eight months ago. Luckily for the owner, a curious and eagle-eyed bird spotted the camera and decided to take up photography.