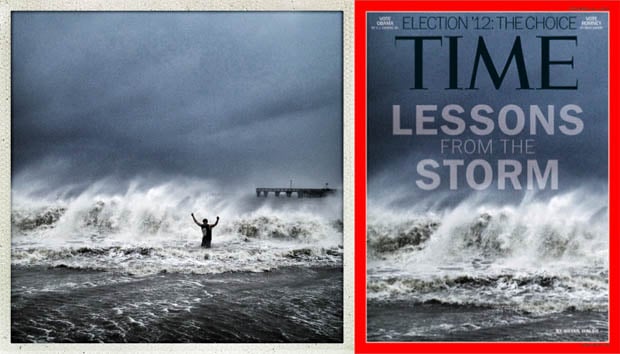 Yesterday we shared a piece by photographer Kenneth Jarecke on why Instagram isn’t fit for photojournalism. Now, from the other side of the aisle, Jeff Bercovici of Forbes writes that Time had great success after hiring five Instagrammers to document Hurricane Sandy:

The resulting collection on Lightbox, Time’s photography blog, was “one of the most popular galleries we’ve ever done,” says [Time DP Kira] Pollack, and it was responsible for 13% of all the site’s traffic during a week when Time.com had its fourth-biggest day ever. Time’s Instagram account attracted 12,000 new followers during a 48-hour period.

One of Benjamin Lowy’s photos even ended up getting selected for the cover, although it’s one of three covers Time is running this week […] While the level of resolution isn’t perhaps what might be achieved with a camera, says Pollack, “It reproduced beautifully. There’s almost a painterly quality to it.”

Pollack tells FolioMag that the decision to use Instagram was based on distribution speed rather than aesthetics.

P.S. It seems that by “Instagram photo”, Forbes and Time are referring to the fact that they were shared through, not captured with, Instagram.