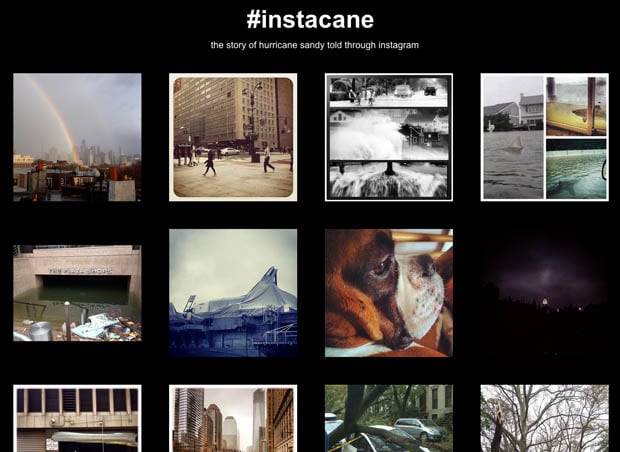 The role Twitter played during Arab Spring in early 2011 gave the microblogging service a huge boost in legitimacy and pushed it into the mainstream. Instagram may be having a similar “coming of age” experience through its role in the ongoing coverage of Hurricane Sandy.


Sarah Lacy of PandoDaily writes that Sandy may be Instagram’s “big moment”:

Hurricane Sandy — or Frankenstorm Apocalpyse as it’s being called on Foursquare — could be Instagram’s big citizen journalism moment. The time when the seemingly frivolous app could get some Arab Spring-style gravitas. Just like the last three Presidential elections have been transformed by a new social media service — YouTube, Facebook and now Twitter — natural disasters and tragedies are emerging as a way for social media services to gain respect and legitimacy as world-changing agents as well.

Instagram CEO Kevin Systrom announced yesterday that 10 photos per second we being shared on the service with the hashtag #sandy:

There are now 10 pictures per second being posted with the hashtag ‘Sandy’. I think this demonstrates how Instagram is quickly becoming a useful tool to see the world as it happens — especially for important world events like this.”

At the time of this writing, there were are 511,311 photographs tagged with #sandy. The total was about half that figure less than 24 hours ago.

Websites have also been popping up to aggregate the citizen journalism shots being shared. Web developers Peter Ng and Chris Ackermann set up a simple website called #instacane that collects all the #sandy photographs in one place, allowing the world an intimate look at what’s currently going down over on the East Coast.

Another time Instagram made a sizable splash in the news was during the Empire State Building shooting back in August, when a guy named Ryan Pitcheralle shared the first photo of a victim before other journalists had arrived on the scene.

(via PandoDaily and NYTimes)