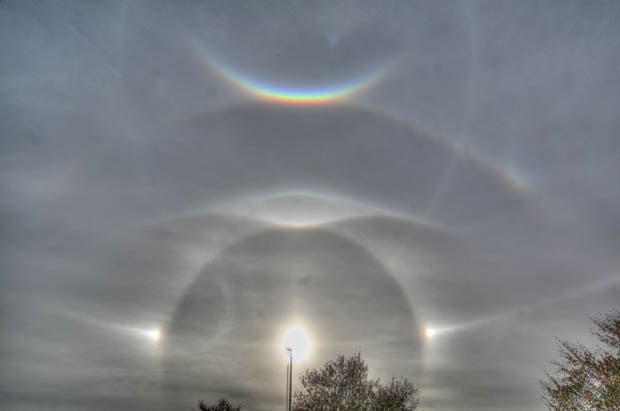 A blacked-out New York City wasn’t the only rare photo op that Hurricane Sandy left in her wake. NASA solar physicist David Hathaway captured the above photo in Huntsville, Alabama two days ago after seeing the strange rings surrounding the afternoon sun.


NASA’s Meteoroid Environment Office head Bill Cooke says that he had, “never seen anything quite like it.” Another onlooker, Kyle Winkleman, called it a “once-in-a-decade event.”

The core of the storm swept well north of Alabama, but Sandy’s outer bands did pass over the area, leaving behind a thin haze of ice crystals in cirrus clouds. Sunlight shining through the crystals produced an unusually rich variety of ice halos.

“By my count, there are two sun dogs, a 22o halo, a parahelic circle, an upper tangent arc, and a parry arc,” says Chris Brightwell, who also photographed the display. “It was amazing.”

We shared some other photographs of “sundogs” last year. You can learn more about the phenomenon, which has the scientific name “parhelion”, over on Wikipedia.