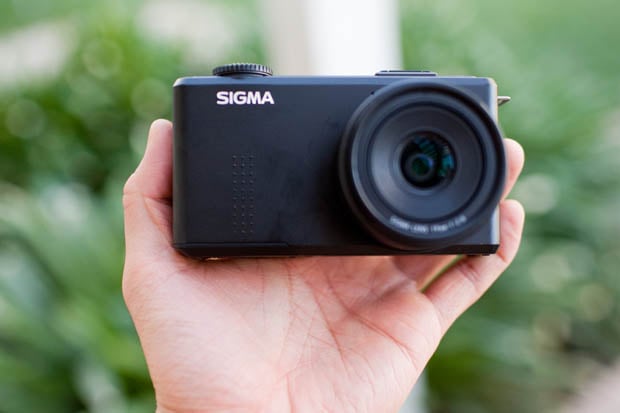 There’s a trend in the camera world these days that involves stuffing large sensors into small cameras. The goal is to squeeze professional-grade image-making ability into a pint-sized package. Sigma’s new horse in this race is the DP1 Merrill, a fixed-lens compact with an APS-C sensor at its core; not just any ol’ APS-C sensor, mind you, but a 46-megapixel Foveon sensor.

Foveon sensors differ from all the other CMOS sensors on the market by essentially stacking three sensor layers on top of each other — one for each RGB color. This allows it to capture full color information at each pixel location, whereas a traditional Bayer sensor captures just one of the three colors at each pixel and then uses “mathemagic” to figure out what the color at each pixel location should actually be.

Since there are three layers, the 46-megapixel figure being thrown around doesn’t refer to the size of the photos that pop out of the DP1 Merrill. You actually get images roughly 15-megapixels in resolution that were created using 46-megapixels worth of data.

It’s a bit confusing, but basically the camera offers a fancy-schmancy sensor that’s supposedly achieves better image quality than the sensors found in other cameras. 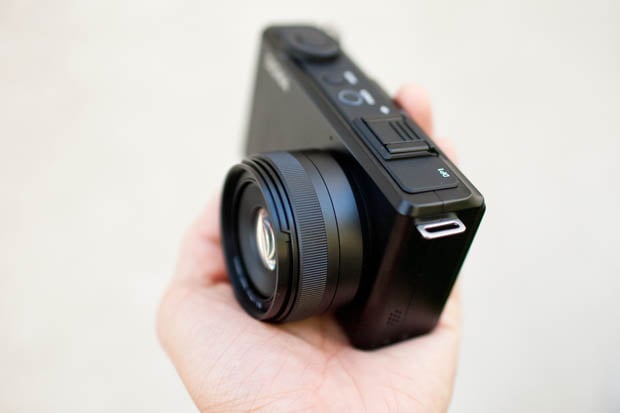 On the front of the camera is a 19mm lens, which is the equivalent of a 28mm in 35mm terms. This lens is the only difference between this camera and the DP2 Merrill, which packs a 30mm lens (45mm equivalent). This review should apply to both cameras; you’ll just have to decide on whether you like shooting wide or normal better.

Here’s the high-level gist of this review: the Sigma DP1 Merrill has a lot of small “cons”, but a very big “pro”.

Let’s talk about the “pro” first. Here’s what’s good about this camera: the sensor.

It makes sense that the Foveon sensor is something special: Sigma spent a good amount of dough back in 2008 to acquire the company and technology behind the sensor. The technology is also a big reason behind why Foveon-powered cameras cost an arm and a leg.

The DP1 Merrill is basically a camera that’s built around a sensor, just like how professional sport teams sometimes build their rosters around star players. If you have a superstar to anchor your squad, you might be okay surrounding him or her with mediocre athletes. Things might not be pretty, but you’re content as long as you can win games.

Photographically speaking, the Foveon sensor inside this camera helps it to “win games.” You might be disappointed with quite a few things about how the camera looks or how the camera works, but open up the photographs on your computer and you’ll be blown away by the image quality (the low ISO shots, at least).

Thanks in part to the great lens in front of the sensor, photographs pop out sharp, contrasty, and well-saturated. They look fantastic.

Here are some sample photographs of random things shot using the camera:

For a better idea of what the camera can do, check out the official sample photographs over on the Sigma website. You’ll be amazed.

The DP1 Merrill may take awesome photographs, but sadly, that’s not all people consider when shopping for a camera. A race car with the fastest top speed wouldn’t be so popular with drivers if it took an eternity to reach that speed… or if the steering wheel was a stick.

Let’s talk about the camera’s appearance and interface first. It may seem shallow, but, as Apple has demonstrated, how a product looks and feels plays a huge part in the experience of owning it.

The DP1 Merrill is, quite literally, a box with a lens attached to the front. There’s no grip, no ergonomics, and nothing to make the camera feel like it belongs in your hands. You may feel like you’re carrying around a high-tech, utility-driven imaging machine rather than a camera you can grow attached to. 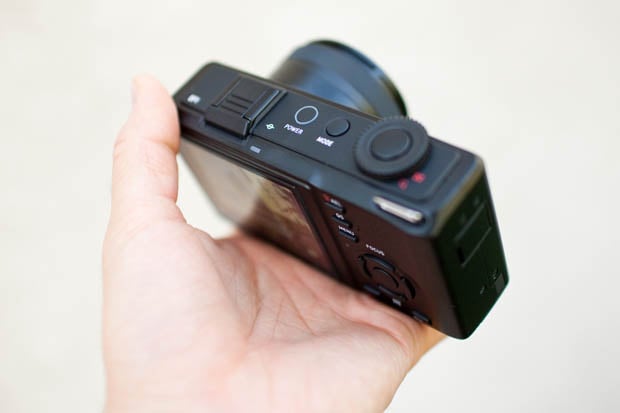 In some ways camera is also as slow as it is inelegant. You’ll need a good measure of patience when using the DP1 Merrill. It’s generally true in this world that the larger something is, the slower it will be. This camera works with massive 46-megapixel image files, so it works with them slowly.

If you use a memory card with slow transfer speeds, you might fall asleep while waiting for your photographs to be processed and stored. Even with a Class 10 SD card, the camera still takes around 13 seconds to process and write a single full-resolution RAW photograph. During that period the playback button won’t respond at all, so you’ll need to wait a bit if you’d like to review your image.

Snap more than one RAW photo at a time, and you’ll need to wait quite a while before you can see what you just shot:

The camera’s battery drain is also as fast as its photo processing is slow, likely due to the heavy-lifting the camera has to do in shooting and processing its beastly photos. Even with moderate usage you’ll probably need to charge the battery every day or two. At times it feels like the battery indicator is draining before your eyes.

Autofocusing is also a bit sluggish. It can take a couple of moments for the camera to lock on to your subject, and in dimly-lit environments the AF system will sometimes hunt unsuccessfully for something to focus on.

Another strange quirk the camera has is that photographs sometimes look horrendous on the LCD screen. Snap a high-ISO portrait of someone in a dimly lit environment, and you might be reluctant to hand over the camera so they can see how it turned out. Perhaps this has something to do with the photos being too massive for the camera to “summarize” properly on the spot, since the photos typically look just fine when you open them up on your computer. 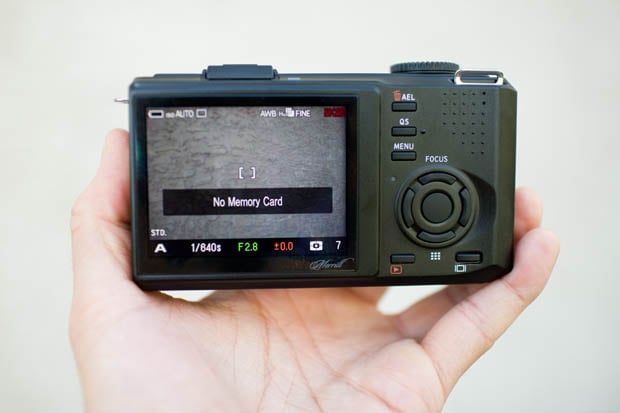 If you boost ISO high enough, it won’t matter whether you’re shooting at night or in the day — the image quality of this camera degrades pretty quickly at higher ISOs. The camera maxes out at 6400, but the photographs at that level are basically unusable: they’ll be unbearably noisy and unpleasantly colored.

Finally, it’s a compact camera that doesn’t come cheap; it’ll cost you a cool $1,000, which is more expensive than some smaller APS-C cameras on the market. 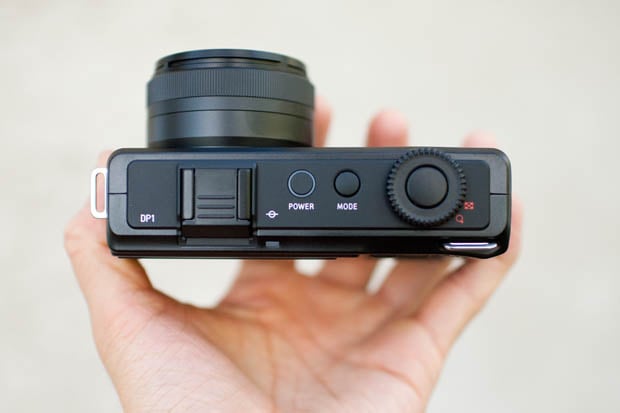 The reason there are so many different cameras types and formats in the industry is because different photographers need different tools for different purposes. You wouldn’t expect someone to criticize large-format cameras for their slow shooting speed, or to bash on high-end DSLRs for their not-so-compact size. That’s what you should keep in mind when considering the Sigma DP1 Merrill.

It may be slow and unwieldy, but the fact that it offers extremely high-quality images at low ISOs should be very attractive to a certain (albeit small) group of photographers. If you regularly shoot slow or static subjects in good lighting and need a semi-compact camera, this might be one you should seriously consider. If you shoot landscapes, or architecture, or fine-art still-life photos, you may be perfectly happy with the DP1 Merrill.

For those of you who need a versatile camera that can deliver high-quality photographs of a wide range of subjects in many different environments, the DP1 Merrill unfortunately doesn’t offer enough flexibility for your needs.

The Value of Time to a Photographer