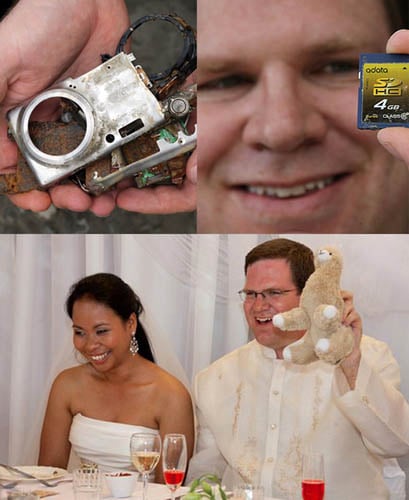 A crazy story of photo survival has emerged over in New Zealand. Apparently a couple had lost their camera during the Christchurch earthquake last February. They found the demolished camera yesterday, 18 months after it got buried in silt, and were overjoyed to find that their precious photos were still readable.

In the rush to evacuate their badly damaged home, Burley lost the camera containing more than six months of photos, including those of the couple’s wedding ceremony and honeymoon […] He was overjoyed when he stumbled across the camera embedded in his driveway this week […] Once the memory card was plugged into his computer, it took only two attempts and a bit of tinkering before all 2.5 gigabytes of photos were recovered.

Memory cards are surprisingly resilient when they’re encapsulated in a camera. A couple of months ago, we wrote about how a CompactFlash card had survived 3 years at the bottom of a creek.

Thanks for sending in the tip, Regan!