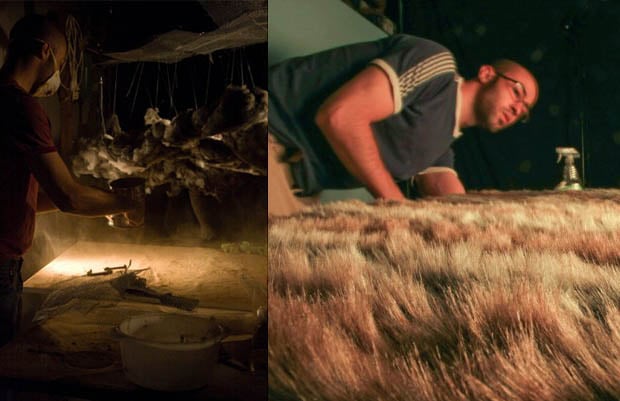 We first featured photographer Matthew Albanese’s Strange Worlds project back in 2010, not too long after the project’s inception. His amazing images appear to show beautiful outdoor scenes, but were actually shot on a tabletop in his studio. He creates extremely detailed dioramas that take months to complete, and then uses various photographic techniques to make the scene look like the real world. It’s like the opposite of using tilt-shift lenses to turn the world into a miniature model.


While we shared some of his final works last time, this time we’re showing glimpses of how those photographs were made. Each final work will be preceded by one or more photographs showing a behind-the-scenes look of the same scene.

Fields, After the Storm

This model is simply made out of faux fur(fields), cotton (clouds) and sifted tile grout(mountains). The perspective is forced as in all of my images, and the lighting effect was created by simply shifting the white balance […] Faux Fur was used to create the texture of flowing waves of grain. The sunset was achieved by shifting the white balance with the addition of colored gels. Cotton, canvas and mixed light temperatures create a sunset. 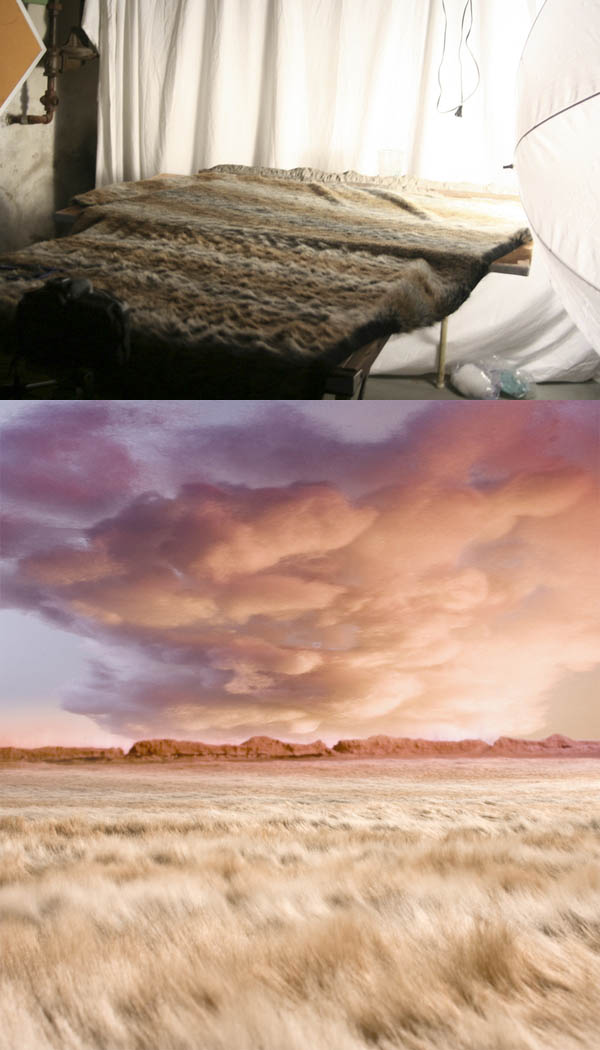 Tornado made of steel wool, cotton, ground parsley and moss 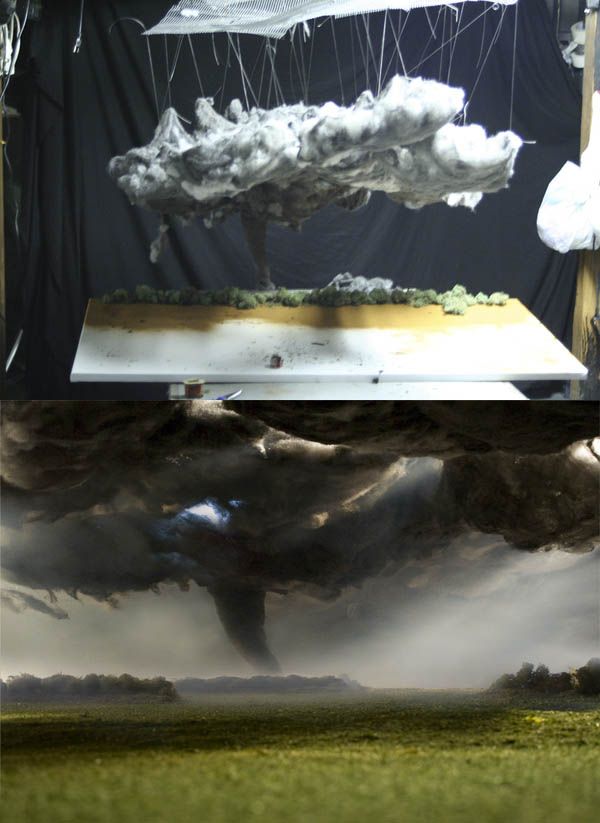 The fire effect was created by beaming colored party bulbs through a clear garbage bag. 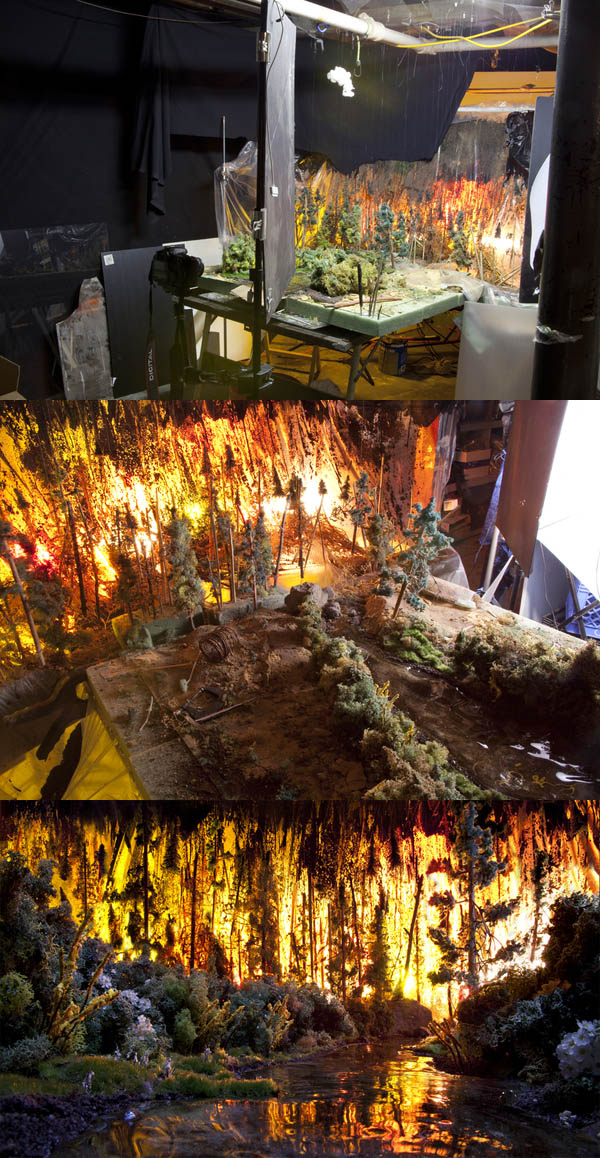 This one was made by photographing a beam of colored light against a black curtain to achieve the edge effect. The trees were composited from life (so far the only real life element in any of these images) The stars are simply strobe light through holes in cork board […] a cork-board with holes punched through it. Strobes were fired from behind to create bursts of starry light. 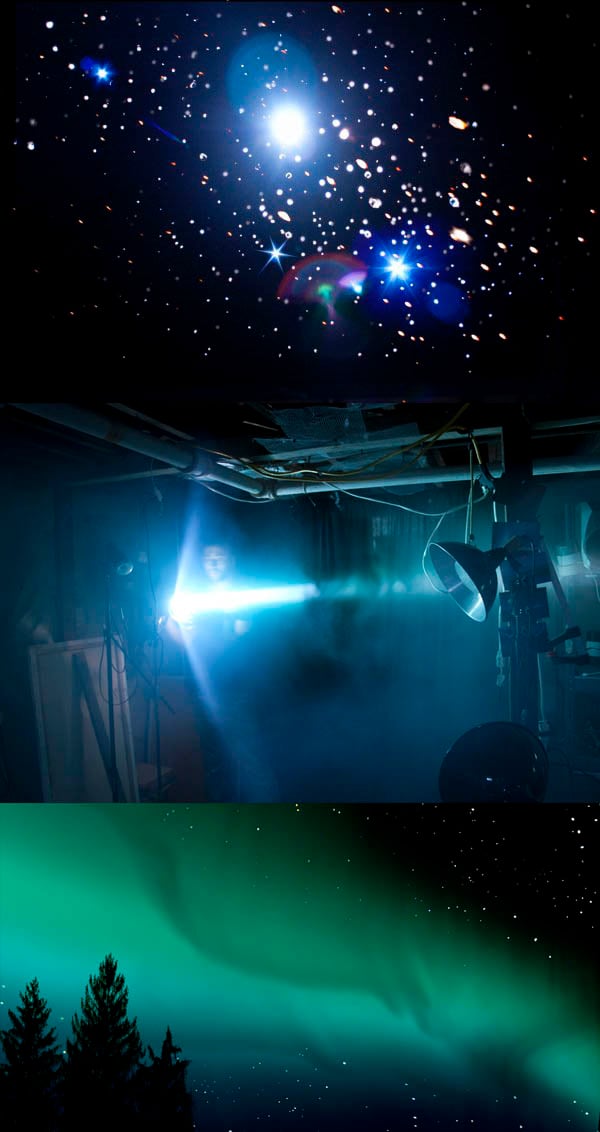 Cotton, salt, cooked sugar, tin foil, feathers & canvas. Clouds are cotton balls shot from below through glass. The surface of the ocean made of cooked sugar poured on top of crinkled foil. 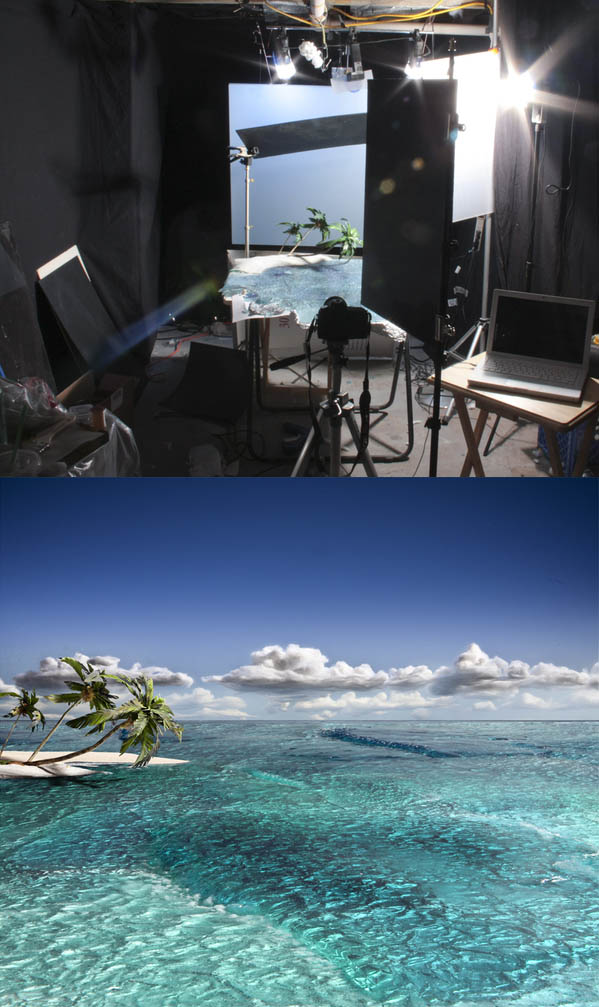 Everything We Ever Were

It took two months to store up enough fireplace ash to create this lunar landscape. The darker rocks are made of mixed tile grout, flag crumpled paper & wire. The Earth is a video still projected onto the wall. Inspired by the Apollo 11 mission. 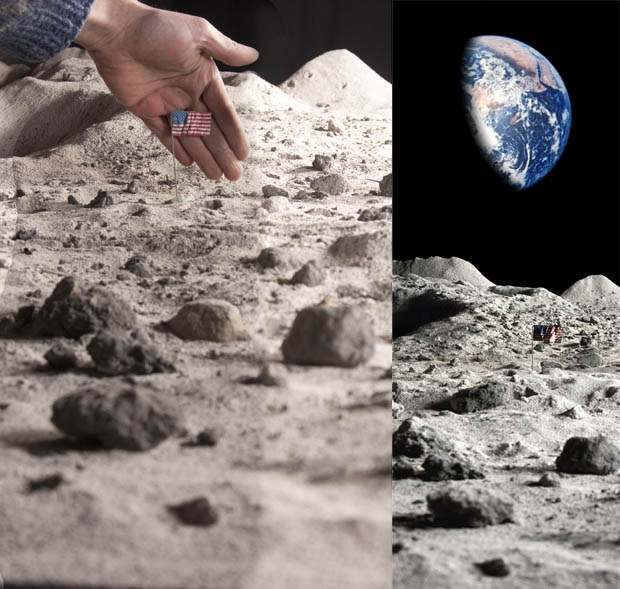 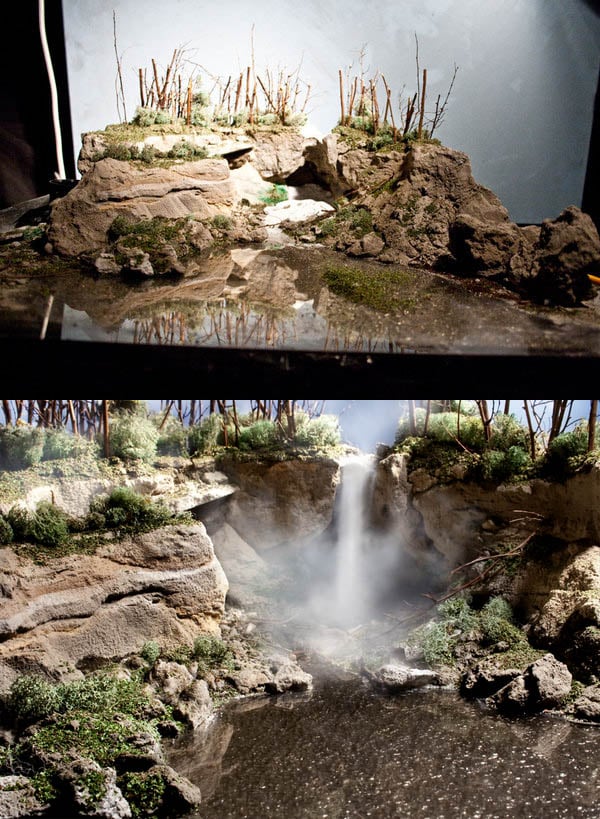 Volcano made out of tile grout, cotton, phosphorous ink. this model volcano was illuminated from within by 6-60 watt light bulbs. The explosion of lava was sampled from a picture I took of fireworks (the only composited element).

How to Breathe Underwater

Diorama made out of walnuts, poured and cast candle wax, wire, glitter, peanut shells, flock, plaster, wire, dyed starfish, compressed moss, jellybeans (anemones), sponges, wax coated seashells, toothpaste, clay, figs, feathers, Q-tips, nonpareils. Surface of the water was created using vinyl shower curtain, plexiglass and clear epoxy. The reflected sunlight effect was created using a video projector through fake fog. The white balance was set for tungsten allowing the sunlight to appear bright and clear while the strobes provided a deep blue shift in the fill light regions. The lens was covered with a piece of blue stretch wrap which created subtle distortions throughout the image. A total of 11 light sources were used including the projector. 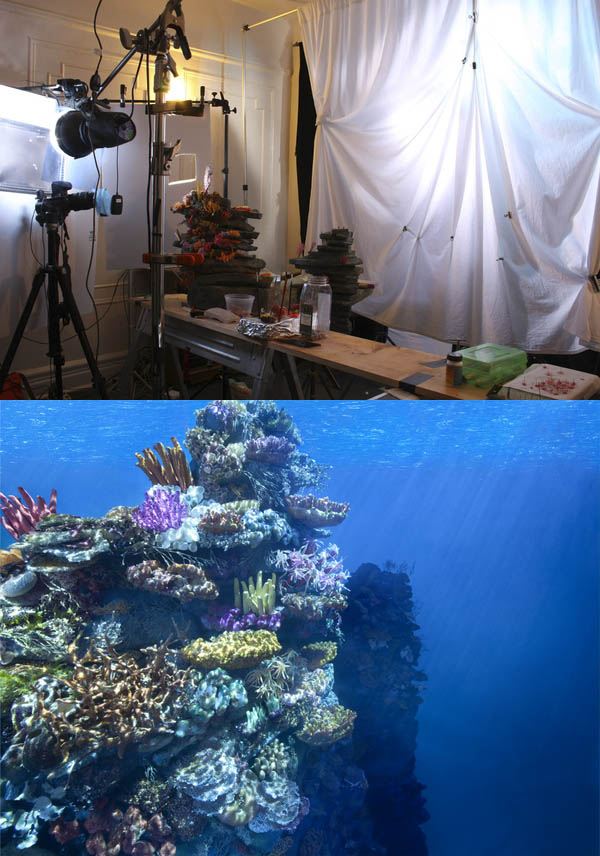 Diorama made using painted parchment paper, thread, hand dyed ostrich feathers, carved chocolate, wire, raffia, masking tape, coffee, synthetic potting moss and cotton. Inside of the willow tree made mostly from thread and ostrich feathers. The tree took over two months of construction time. Cotton batting dyed green was used to prevent too much light from passing through during the shooting process. 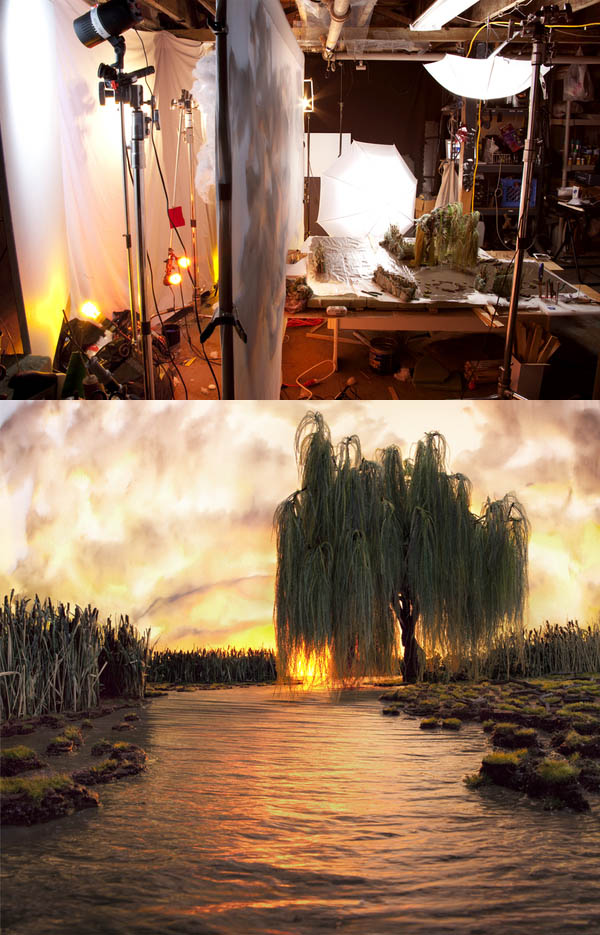 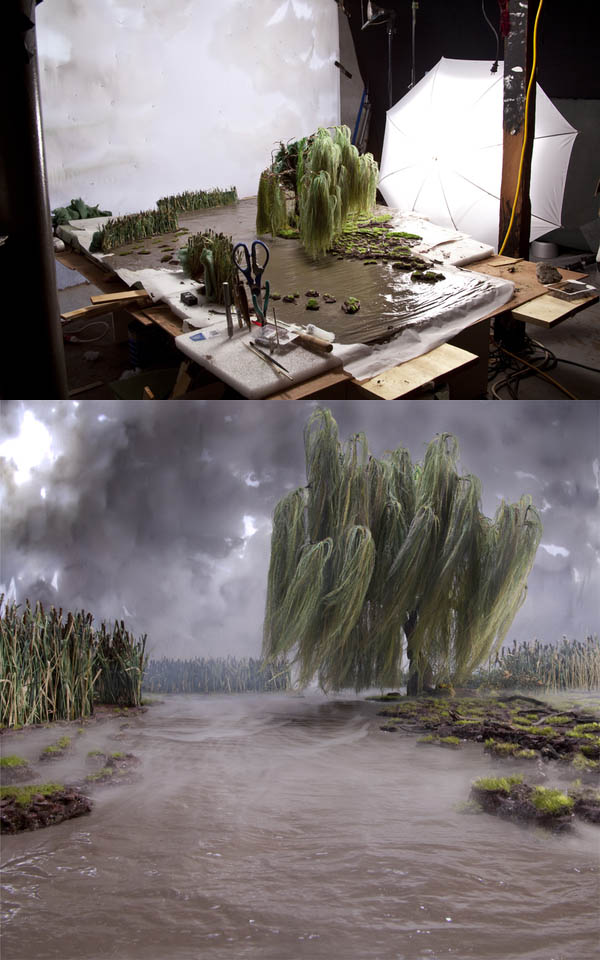 Inspiration, Walkthroughs
behindthescenes, bts, diorama, howitwasmade, howitwasshot, macro, matthewalbanese, mini, miniature, miniatureworlds
Related Articles
Discussion
Trending Articles
Mars Curiosity Rover Snaps Photo of ‘Doorway’ on Mars
May 16, 2022
Crocodile Dad Gives Over 100 Babies a Ride on His Back
May 15, 2022
Navy Fighter Jet Seen with ‘Shockwave Lines’ as It Nears Speed of Sound
May 16, 2022
The Science Behind Why Watches are Set to 10:10 in Advertising Photos
May 17, 2022
Astronaut Captures Lunar Eclipse from the International Space Station
May 17, 2022