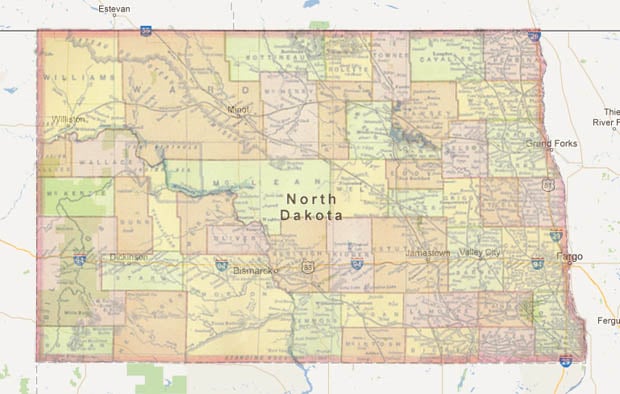 A decade ago, photographer Andrew Filer obtained the most detailed map of North Dakota he could find, and began a project of documenting the towns on it. Not just some of the towns, but every single named dot on the map. After years of dedicated work, Filer succeeded in photographing the entire state. He ended up visiting over 850 different locations and snapping 9,308 photographs.

Filer says that roughly 50% of the images were shot during 4 multi-week road trips he took through the state back in 2008 and 2009. He would embark on a tour and photograph for as long as the weather would permit.

Every dot on the map interests me, especially the little tiny ones. Some “towns” are no more than an intersection, possibly with a store or a town hall. A few towns seem to be gone without a trace, though sometimes the tiniest evidence remains […] Note that these pictures aren’t meant to represent symbols of the town. So if your town has a big beautiful cathedral and the world’s largest woolen Guinea Hen, and I’ve only taken pictures of some bar and a closed factory, I’m sorry. But that’s what I like. I’d also like to apologize for photos through bug-splattered windshields. These photos are mostly raw and unedited, so what I shot is what you see. [#]

You can view all of the photographs in the project over in this Flickr collection. There’s an alphabetical list of the locations here. Filer is also planning to publish the work as a photo book titled Every Dot on the North Dakota Map. Filer might be done photographing the state of North Dakota, but he’s far from done with his “Every Dot” concept. He is now moving into new states — including South Dakota, Washington, and Minnesota — and visiting countless more dots on more maps.

Are Parents Taking Too Many Pictures of Their Kids These Days?

Magic Lantern Comes to the Canon 7D: Focus Peaking and a Slew of Features