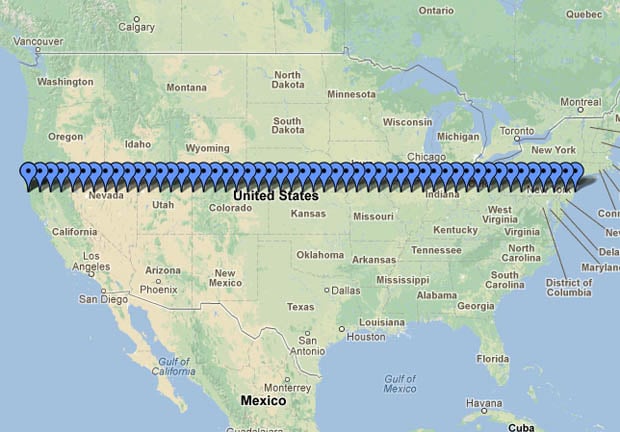 Want to see an example of what dedication to a photography project looks like? Check out The Fortieth Parallel, an ongoing series by Cambridge, Massachusetts-based photographer Bruce Myren. It’s a set of photographs captured across the 40th degree of latitude across the United States, at every whole degree of longitude. See those markers on the Google Map above? Those are all the photo spots that Myren aims to photograph.

Myren explains that the project was birthed over two decades ago through a random conversation with a friend:

The core idea of this project came to me while I was living for a year in Boulder, Colorado in 1991. A friend and I were sitting on top of Flagstaff Mountain and gazing at the scene. I noticed that the road we drove up, Baseline Road went east in a straight line as far as I could see. I asked my friend if he knew why it was called this. He replied that it was the 40th parallel of latitude, and went on to explain that it was the baseline for creating townships and homesteads, and was a key marker to the settlement of the West. I had a project: I was going to document these arbitrary points of human measurement and the landscape found at the intersections. [#]

He began traveling to the locations in 1998 when civilian GPS navigation emerged, and has since been to 28 of the 52 points on the project roadmap. 53 miles separate each of the points, which cover 20-square-foot areas at each of the locations. Myren restricts himself to these small patches of land and captures single panoramas, each one comprising three 8×10 color transparency photos shot using his large-format Deardorff camera.

Here’s a selection of the panoramas he has captured so far, along with details about where and when each was captured:

You can read Myren’s lengthy description of the project here, or check out more of the panoramas he has captured thus far here.

P.S. Myren was inspired to share this project with us after seeing our post about photographer Andrew Filer photographing every dot on the map of North Dakota. Also, did you know that the 40th parallel line is the line that was chosen to divide Kansas and Nebraska?

Image credits: Photographs by Bruce Myren and used with permission

Scientists Building Security Cameras That Can “See” Crimes Before They Happen