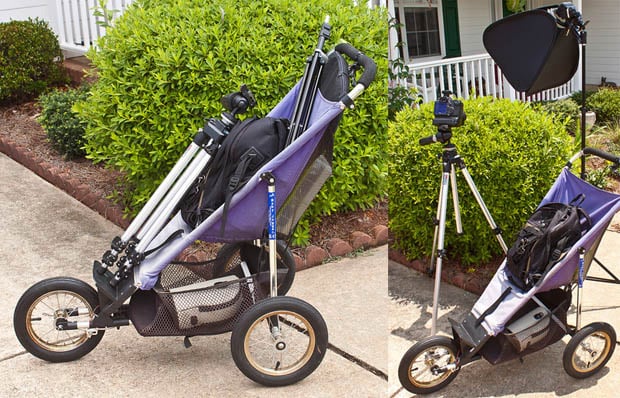 Don’t have any more babies to transport? Old strollers can be repurposed as a way to wheel your camera gear from place to place. Just load it up with your camera bag, tripod, lighting equipment, and accessories, and you’ll have yourself a mobile mini studio.

Photographer Jim Davenport, whose purple gear transport is seen above, tells us,

My main inspiration for using the jogging stroller to carry my gear was the fact that I am 71 years old. After shooting for over 40 years and carrying heavy loads, I decided I needed a little help. I also needed something to stop the light stand from tipping over in the wind. I had already had it blow over and break the shoe on a flash. Third reason I went with the used jogging stroller was that I am cheap. I looked at various carts and carriers and just could not justify the cost.

Since my shooting now is primarily for me, I wanted something as lost cost as possible. I found this used stroller for $15. There are some high-end jogging strollers with all sorts of attachments but I wanted a simple one without a lot of extras to add to the weight. The one I bought works well for me and did not break the bank.

Davenport uses velcro straps to secure his stands to the stroller while shooting. In the photos above, you can see that he uses the back pocket for his softbox, and the compartment underneath for small accessories (e.g. filters and remote shutter releases).

Image credits: Photographs by Jim Davenport and used with permission

Photog Documented Being Stranded in the Antarctic Nearly 100 Years Ago

Canon Speedlite Flashes Are Named After Their Guide Numbers