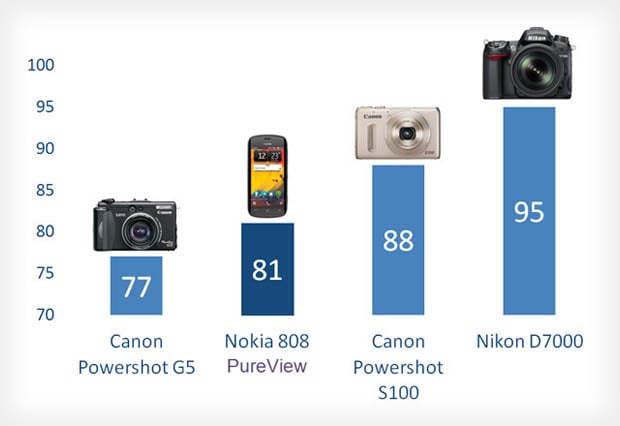 A few weeks ago, we casually remarked that the best cameraphones today can probably snap better photos than top-of-the-line compact cameras from over a decade ago. Turns out that it’s true.


Camera equipment rating service DxOMark announced today that it will be expanding its tests to cover the cameras found in mobile devices (e.g. cellphones, smartphones, and tablets). In its initial “first glance” of the industry published today, the service makes an interesting claim: that “mobile image quality is now superior to that of 5-year-old compact cameras” (so we were off by around 5 years).

Here’s what they wrote in a press release sent out today:

Mobile phone cameras have become a key feature for a large number of consumers: in 2011, more than one quarter of all photos were taken with a mobile phone. This trend has accelerated in 2012 – which may end up being the year when mobile photography surpasses traditional amateur compact camera photography.

Mobile phone image quality has also made considerable progress – for example, the image quality of the Nokia 808 PureView, in first place in the DxOMark Mobile rankings for still photos, is superior to that of a 5-year-old compact camera. And as for video, the best mobile tested in this category, the Samsung Galaxy SIII, outperforms the Canon Powershot 100.

As you can see from the chart above, though, cameraphones still have a ways to go before they can match the quality of the latest digital cameras on the market.

(via DxOMark via Photo Rumors)