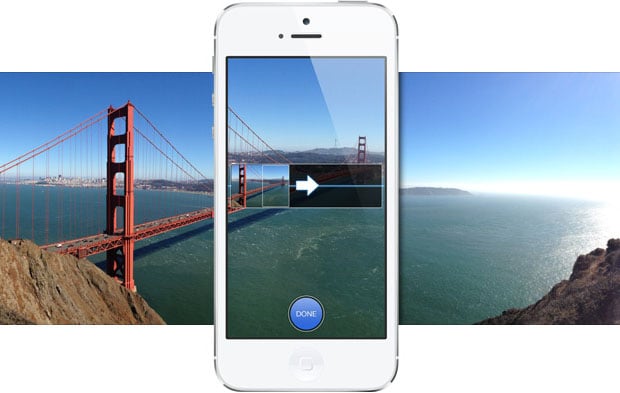 Back in 2011, it was discovered that iPhones, iPods, and iPads running iOS 5 had a hidden panorama feature that was built into the operating system but not ordinarily available through the devices. Methods were discovered for unlocking the feature, which we all assumed was simply a half-baked feature that wasn’t ready for release at the time.

It seems that Apple engineers have been busy polishing the feature in the 10 months since then, as the panorama feature was announced yesterday at the iPhone 5’s unveiling. For those of you who are content with your iOS 5 device, here’s some good news for you: iPhone 4S users will get the new panorama mode as well when iOS 6 is rolled out on September 19th, 2012.

The feature’s basic functionality hasn’t changed much since we tested it out last year. It’s found as a button within the “Options” menu of the Camera app. A preview box gives you a sense of the photo you’re creating as you sweep from left to right, providing an arrow that keeps you centered. This is how Apple describes it on its website:

The new panorama feature lets you capture everything from a family reunion group photo to a jaw-dropping shot of the Grand Canyon. With one smooth motion you can shoot up to an impressive 240 degrees. The gyroscope, A6 chip, and Camera app work together to create one seamless, high-resolution panorama up to 28 megapixels.

Here’s the feature being announced (starts at 3:30):

It’s interesting that Phil Schiller chose to call the Panorama feature, “perhaps the most amazing feature of the new camera in iPhone 5”. We haven’t played around with the updated version, but the one we saw last year fell way short of the other downloadable panorama apps out there, most notably, 360Panorama and Microsoft’s Photosynth (I highly recommend both).

Seagull Steals Camera, Films Itself Flying Off Into the Sunset