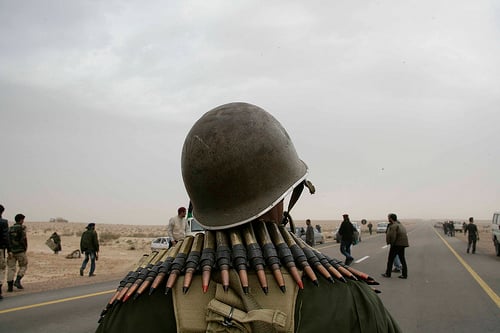 New York Times photographer Lynsey Addario was recently released along with three male journalists after being taken captive in Libya. After details of her abuse was reported in the news, there were immediately reactions from those who believe that female journalists shouldn’t be assigned to war zones because of the risks. Addario responded yesterday, saying:

If a woman wants to be a war photographer, she should. It’s important. Women offer a different perspective. We have access to women on a different level than men have, just as male photographers have a different relationship with the men they’re covering.

[…] when I was in Libya, I was groped by a dozen men. But why is that more horrible than what happened to Tyler or Steve or Anthony — being smashed on the back of the head with a rifle butt? Why isn’t anyone saying men shouldn’t cover war? Women and men should do what they believe they need to do.

I don’t think it’s more dangerous for a woman to do conflict photography. Both men and women face the same dangers.

You can read the rest of her post over on the NYT Lens Blog.

PetaPixel Has Been Acquired by Kodak!