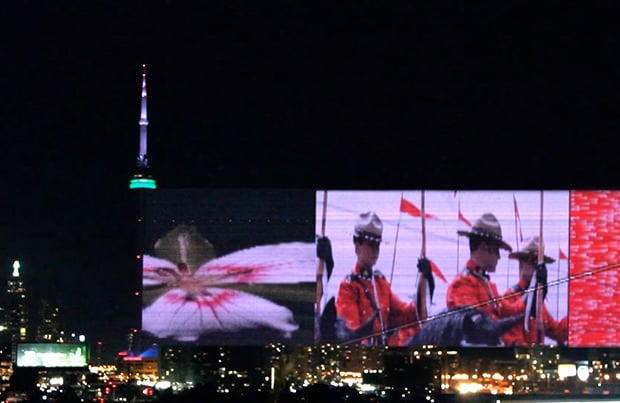 If you’ve visited the CN Tower in Toronto, Canada anytime during the past five years at night, you’ve likely enjoyed the dazzling light show that appears on the side of the tower. The 1,330 uber-bright LED lights (which cost a cool $2.5 million) were installed in the elevator shafts back in 2007, and are turned on from dusk every day until 2 the next morning. What you might not have known, however, is that the seemingly random colors that appear are really not so random after all: they’re actually pieces of photographs!

Here’s the way the lights work: what the 252 LED lights in each shaft display are slivers of images and photographs. It’s as if a 126-pixel-tall image is being passed under a two-pixel-wide slit over the course of 10 seconds. Your eye just sees a bunch of changing color patterns measuring 2×126-pixels, but if you were to capture each of the columns of colors and arrange them side-by-side, the original photo would be rebuilt.

That’s exactly what Canadian visual effects compositer Avi Salem recently did. After hearing about this cool fact about the Tower lights, Salem decided to try his hand at reconstructing the source photos. He set up his camera on a nearby building and began snapping dozens of photos of the Tower every few seconds. Using the pixels from the photos, Salem created the following video showing the images as if they were sliding out of the tower (like a roll of film being pulled from a canister):

He also states that the whole thing isn’t meant to be a giant real-world easter egg: the technique is actually a clever way to create seemingly random light show based on color themes. Whenever there needs to be a specific palette of colors (e.g. holidays and major events), Mellon and his team can simply choose a photograph that reflects what’s needed. A photo of trees for spring, photos of a snowy field for winter, and so on.

Finally, see that strange diagonal line slicing through the images? That was caused by an elevator traveling up the shaft while the photos were being shot!

(via Toronto Star via Photoxels)