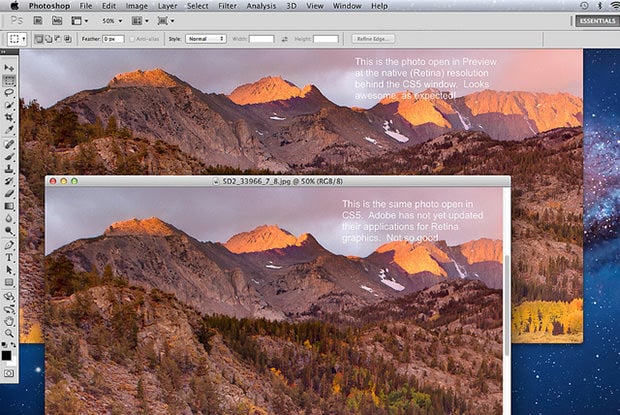 New uber-high-resolution HiDPI displays like Apple’s Retina display are amazing to look at, but aren’t very useful unless 3rd party software makers optimize their programs to support the technology. If you’re a photographer that has already shelled out a few G’s on a Retina-equipped Macbook Pro, you’re probably disappointed with the fact that Adobe Photoshop and Lightroom aren’t optimized for the display. In fact, some photographers are finding the display unusable for professional photo editing due to the difference in detail between apps optimized for Retina and those that aren’t.

If that’s you, Adobe’s announcement today will be music to your ears: Photoshop CS6 will support HiDPI displays in the next few months, and Lightroom 4 support is on the way as well.

[…] I experimented with Photoshop CS5 instead. I opened a full-resolution JPG in Preview and then opened the same photo in CS5. I compared how the CS5 (non-Retina) looked to the Preview (Retina) version in the background. The Preview version was a 100% crop and the CS5 version was viewed at 50% to match scale. The difference in fine detail is very noticeable. Have a look for yourself at the full resolution version of this upload. In my opinion, it will not be possible to do detailed photo editing such as sharpening on a Retina display until Adobe updates its products for Retina graphics.

Photoshop and other non-Retina-capable applications think they’re working with a 1440×900 display, so that is the graphic the program is generating. Meanwhile, the Mac knows it needs to scale all that up to 2880×1800. This is done by taking each pixel and expanding it to a four pixel area on screen (called pixel-doubling, since each linear dimension is doubled). That’s why it looks pixelated. Adobe is working to update this for CS6, but no word on when. I hope Lightroom isn’t far behind.

Here’s the side-by-side comparison Hawkins is referring to (we don’t need to tell you which is Preview and which is Photoshop): 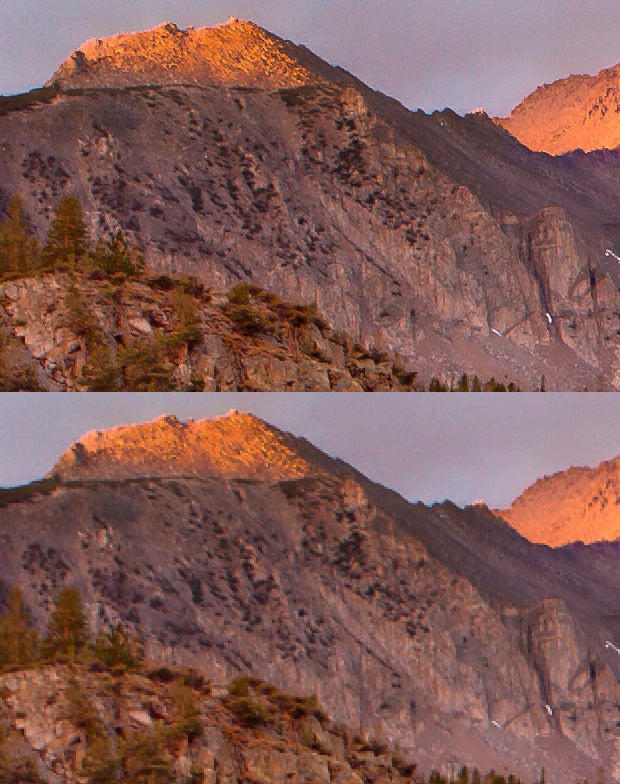 Adobe says that CS6 will support Retina come fall, that Lightroom isn’t far behind, and that support for a wide range of CS6 products will arrive in the coming months as well.