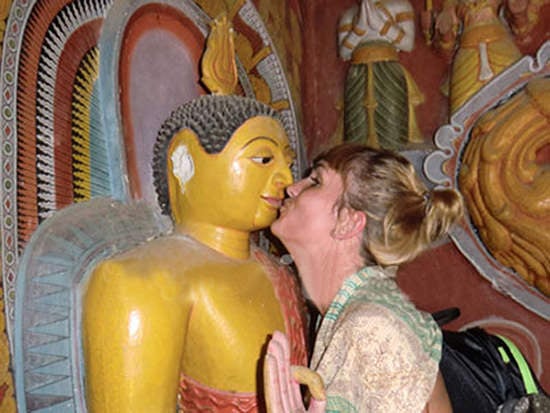 It’s standard procedure for photo labs around the world to contact authorities if illegal activity is discovered in pictures, but what constitutes “illegal activity” can different widely from place to place. Case in point: three French tourists were recently given jail terms in Sri Lanka for photographs they took containing Buddha statues.

The photographs showed the tourists posing with the statues, and in at least one of them (shown above), one of tourist was pretending to kiss a statue.

After dropping the pictures off at a photo lab to have prints made, the owner of the lab noticed the images and alerted authorities. The two women and one man were then detained and charged with “wounding the religious feelings of Buddhists by taking pictures deemed insulting.”

A magistrate later sentenced the trio to six months of prison with hard labor, and also a small fine. The punishment was “suspended for five years”, though, meaning the tourists won’t actually be serving any of the jail time or doing any of the hard labor. Their punishment is therefore a wrist slap and a fine.

The next time you’re traveling abroad, you should think twice about snapping photographs that are potentially offensive — those pictures might actually be illegal.

(via eTurboNews via Boing Boing)

PetaPixel Cameo in the Documentary Film “Side by Side”