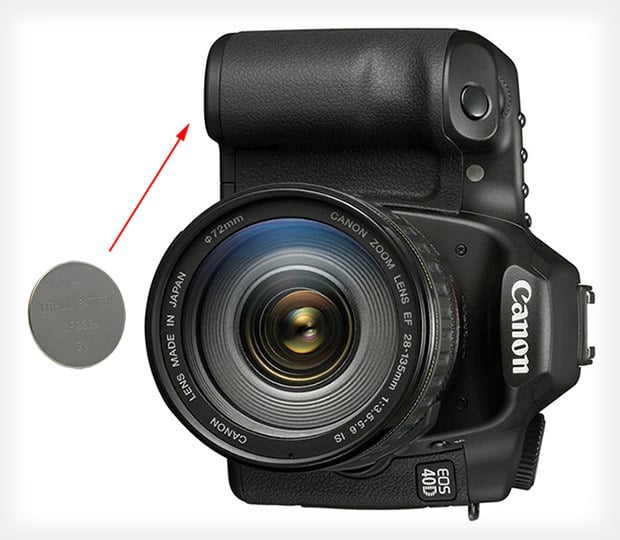 If your DSLR ever dies in your arms or starts acting funny, here’s a simple thing to check before shelling out money to have it examined by professionals: the camera’s internal clock battery. Redditor Aero93 writes,

So my camera died out of nowhere. No matter what I did and tested, it wouldn’t turn on. Canon quoted $400 to check the cam + labor parts. Independent repair guy was around $250. It was too much for me. I decided to tackle the problem on my own. I got the manual online. Started taking the camera apart. I got stuck on one thing.

After that, I started asking around on a forum. Somebody suggested I check the internal clock battery, I didn’t even now it existed and its right next to the regular battery. I went out and bought a new one. Boom, camera fired right up.

The internal clock battery is the one that keeps the clock in your camera running even when the main battery is removed. They usually cost about a buck each.

DSLRs should generally work just fine even without the internal clock battery in place — they’ll just have a horrible memory when it comes to remember what date and time it is — but it seems that in certain cases the camera might stop functioning.

There are also reports of drained or dead clock batteries causing other problems as well, including dishonest battery charge level indicators and camera settings going berserk.

If you’re experiencing any of the problems listed above, you might want to try replacing the clock battery. The batteries are cheap enough, and the change simple enough, that it can’t hurt to try.