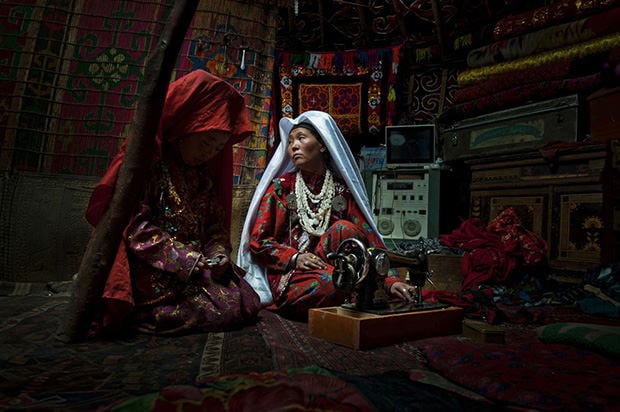 The photo above is the winning photograph in this year’s National Geographic 2012 Traveler Photo Contest. It’s a photo by Brooklyn-based photographer Cédric Houin titled “Butterfly”, which shows a Kyrgyz mother and daughter using a sewing machine in their dwelling. His caption reads,

This image was shot in the Kyrgyz lands of the Wakhan Corridor. The intimacy of this everyday life moment, shot inside of a family yurt, is in total contrast with the harsh environment these nomadic tribes live in. On the right we notice a television and a sound console. These tribes live weeks away from any village by foot. In spite of being located at an altitude of 4,300 meters in one of the most remote areas of Afghanistan they are equipped with solar panels, satellite dishes and cellphones. Ancestral ways of living, with touches of modernity.

The image was submitted into the category Sense of Place (the other categories were: Travel Portraits, Outdoor Scenes, and Spontaneous Moments).


Photographer Alexandra Avakian, one of this year’s judges, had this to say about the image:

The light and texture captured in this portrait are painterly, and the predominance of red is rich. The content of the photo is striking because the photographer captured both the nomads’ traditional way of life and some of their modern accouterments—the viewer gets the visual satisfaction of something that goes against cliché. Triangle shapes tend to add dynamism to photos. In this picture they appear in several places, including the main subject’s knee, elbow, and white scarf.

I’ve slept in the guest yurt of Kyrgyz nomads in remote mountains while on assignment for Elle magazine; the location is hard to reach and off the beaten path for most travelers, and therefore of educational as well as aesthetic value.

Competition for this year’s prize was fierce: the contest received over 12,000 photo entries from 6,615 photographers based in 152 countries around the world.

Be sure to head over to the contest website to see the entire list of winning entries!