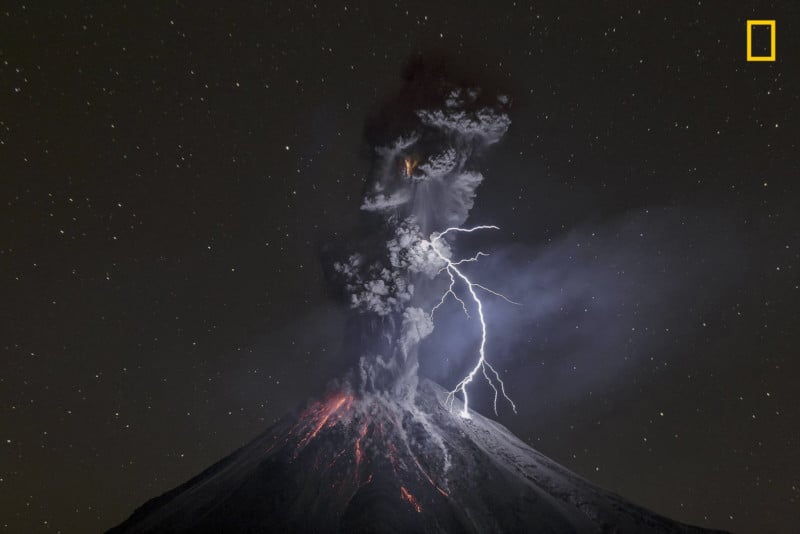 National Geographic has announced the winners of its prestigious Travel Photographer of the Year photo contest for 2017. The grand prize winner is Mexican photographer Sergio Tapiro Velasco, who shot this incredible photo titled “The Power of Nature,” which shows lightning striking an erupting volcano.

The photo was captured on December 13th, 2015, outside Colima, Mexico, at the Volcán de Colima, one of the most active volcanoes in Latin America. He did extensive research and patiently monitored the volcano for nearly a month prior to this shot. Velasco was positioned 12km (~7.5mi) away from the crater when he saw and shot the biggest volcanic lightning bolt he’d ever witnessed.

“When I looked on the camera display, all I could do was stare,” Velasco tells Nat Geo. “What I was watching was impossible to conceive, the image showed those amazing forces of nature interacting on a volcano, while the lightning brightened the whole scene. It’s an impossible photograph and my once in a lifetime shot that shows the power of nature.”

Velasco’s striking photo — 1st place in the Nature category — was selected from over 15,000 entries submitted by photographers in 30 countries. His prize includes $2,500 and a 10-day trip for two to the Galápagos Archipelago with National Geographic Expeditions.

Here are the other top photos from the major categories this year:

You can also find the entire gallery of winning photos on the Nat Geo contest website.

Watch a GoPro Go Through an Electron Beam Irradiator