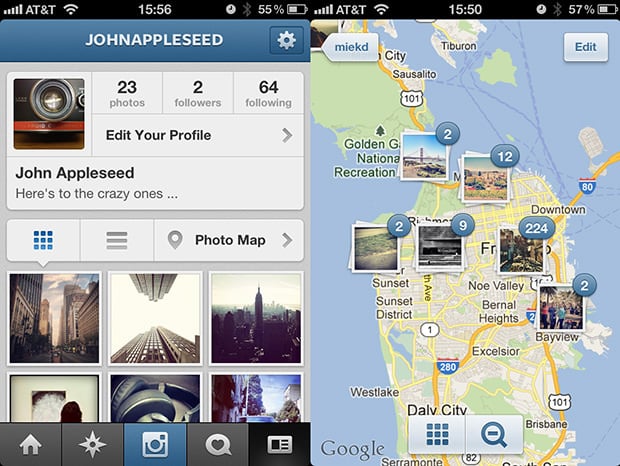 Instagram has rolled out version 3.0 of its photo sharing app, which now boasts over 80 million users around the world. The new release focuses on improving the browsing experience for photos, with geotagging being one of the core ideas. There’s a new Photo Maps view that’s similar to what you can find on services like Flickr. The page overlays photos onto a map, allowing you to browse images based on where they were shot.

The feature is a big change from the way images are consumed. Previously, photographs had a relatively short lifespan — once they were pushed out of a stream by more recent images, they were out of sight and out of mind. Now, using the Map View, even older photographs can be enjoyed again by visiting their geotagged location. In addition to experiencing your own photos in the new view, you can also browse other members’ images by pressing the new button found in their profiles.

For users uncomfortable with sharing their location data, the service has made removing the geodata easy. Users are given the chance to review previously geotagged images prior to their maps being made public.

Here’s a video introduction to the new feature:

In addition to geotagging, there are a number of more minor usability improvements to the service, including redesigned pages, infinite scrolling without having to hit a “load more” button, and speed improvements for increased responsiveness. You can find a detailed features list in this Instagram blog post.