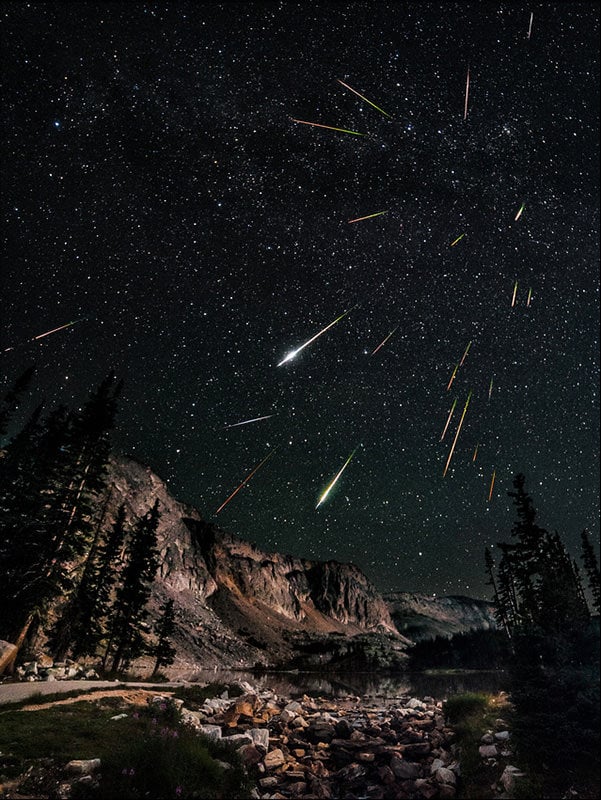 Capturing a single shooting star can make for a brilliant photograph, but what does it look like if you composite multiple meteors into a single image? Fort Collins, Colorado-based nature photographer David Kingham decided to find out recently during the ongoing Perseid meteor shower. The amazing photo seen above is what resulted.

Here’s his description of how the image was created:

Last night I went out to Snowy Range in Wyoming in search of dark skies for the Perseid meteor shower. I wanted something special for the foreground and I knew the Snowies faced in the perfect direction to get this shot. I started shooting at 10pm and didn’t stop until 5 am, I had to change my battery every 2 hours which made for a long night. The moon rose around 1am to light up the mountain range.

This is a composite of 23 images, 22 for the meteors/stars and 1 taken at sunrise for the foreground which was lightly blended in. I also corrected the orientation of the meteors to account for the rotation of the earth (this took forever!)

The fact that the stars move in the night sky makes the compositing a bit tricky. To combine the images in Photoshop, he took a base photo and overlaid each shot he had that contained a meteor. For each layer, he lowered the opacity to 50%, matched up the stars with the base layer by rotating around Polaris, and then erased everything in the layer except the shooting star.

He says that the benefit of this technique is that the elements can be exposed in a way that maximizes quality. The base shot containing the stars can be shot at low ISO and longer exposure times, while the meteors can be shot using high ISO (maximizing the intensity of the meteor without having to worry about the rest of the sky being too noisy).