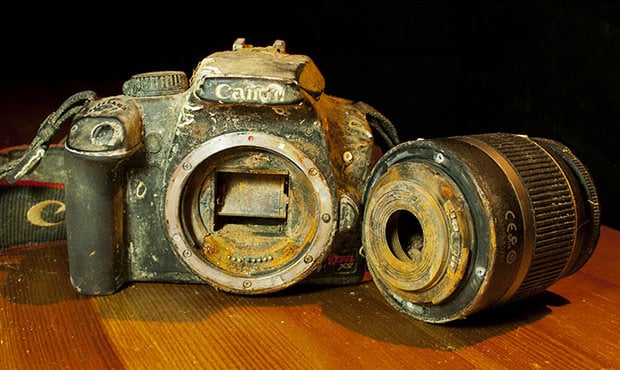 Wildlife photographer Markus Thompson was scuba diving in Deep Bay outside Vancouver recently when he stumbled upon a rusty Canon Rebel DSLR at the bottom of the ocean floor. After taking the SD card out and cleaning it, he was surprised to discover that it still worked, especially because the photos on it revealed that the camera was dropped back in August 2010. Thompson then turned to Google+ to find the owners, writing,

Approximately 50 pictures on the card from a family vacation. If you know a fire fighter from British Columbia whose team won the Pacific Regional Firefit competition, has a lovely wife and (now) 2 year old daughter – let me know. I would love to get them their vacation photos :)

After receiving thousands of comments and shares, he received an email from a friend of the owner, making this yet another crazy example of the Internet being used to reunite lost photos with their owners! You can see more photos of the DSLR here, in case you’re wondering what a year of seawater can do to a camera.

(via Markus Thompson via The Verge)

How Do People Respond to a Disposable Camera Left Unattended in Public?