Photoshopping gets a lot of bad press due to the fact that it’s often used to “make skinny models skinner and perfect skin more perfect”, but there are also people out there using it for good. The video above is a recent TED talk given by retoucher Becci Manson on how Photoshopping was used to bring joy and memories back to those affected by the devastating 2011 tsunami in Japan.


After the disaster, Manson traveled to the country with the organization All Hands in order to provide relief. While there, she discovered that lost photos, albums, cameras, and memory cards made up a huge part of the heartbreak experienced by the victims.

Of the photos that were recovered, nearly all of them were damaged after being soaked in salt water, sewage, and oil.

Deciding that the photos should be restored before returning them to their owners, Manson turned to social media to seek volunteers. Within 2 weeks after putting out a call for help, she found herself with 150 volunteers willing to offer their time and services. Half a year later, the Photo Rescue volunteer count had ballooned to 1,100.

In the end, Manson’s efforts led to over 135,000 photographs being cleaned, and hundreds were retouched and returned to their owners.

Here are some before-and-after samples showing photos restored by the project: 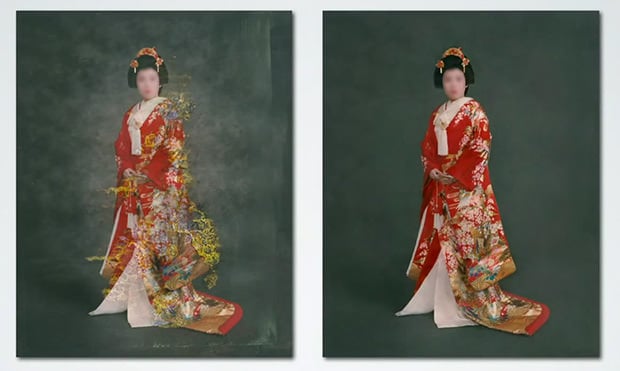 There you have it: one way Photoshop is being used to make a positive difference in the world.