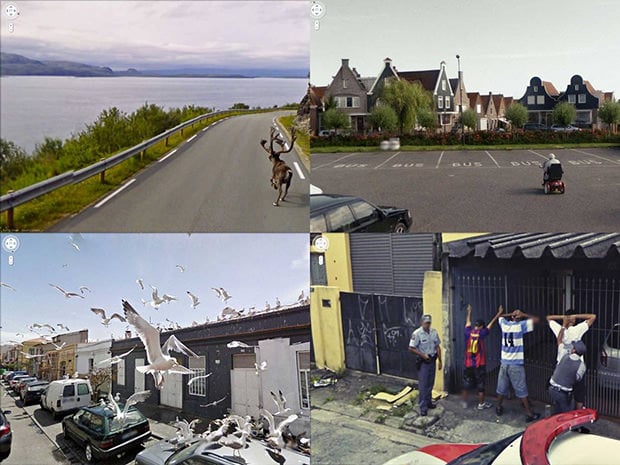 In 2011, photographer Michael Wolf was awarded Honorable Mention in the World Press Photo 2011 contest for screenshots taken from Google Street View. It immediately sparked a debate regarding whether or not the work should even be considered “original photography”. The Independent has an interesting article about a different Street View “photographer”: Jon Rafman, whose work we’ve featured here before.

At first, [Rafman] would spend eight to 12 hours at a time traversing the globe from his desktop. “It was destroying my body,” he says. But when the images he’d collected went viral online, he began to take submissions from other users, too. Some had collected images of prostitutes at work, others presented car accidents, even dead bodies left by the side of the road – and, presumably, ignored by Google’s drivers. Many of the images in the exhibition have now been wiped from the web: the perps lined up against a wall by the São Paolo police are gone from Google Maps. A man sitting with his legs splayed strangely around a lamppost in Toronto has been blurred into obscurity.

Rafman’s images, by contrast, are almost entirely untreated. He even leaves the Google Street View navigation tool in the top-left corner of each photograph. “The work is connected to the history of street photography,” he explains, “but also to the 20th-century ready-made movement. So leaving those artefacts in the image is extremely important. In the bottom-left corner of each picture is a link that says, ‘Report a problem’.

His work, titled The Nine Eyes of Google Street View, will soon be exhibited at London’s Saatchi Gallery.

Google Street View photographs: the man on the street [The Independent]