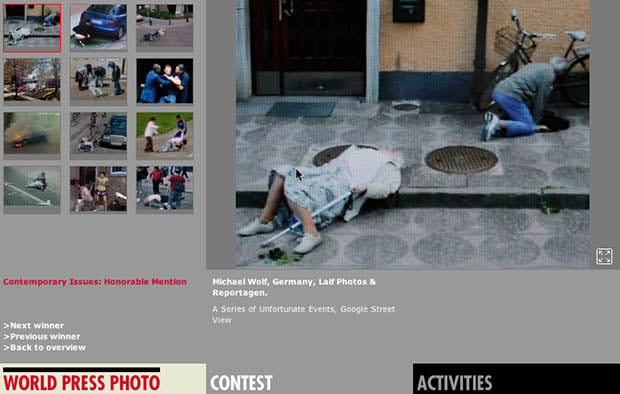 Does Google Street View count as photojournalism? That’s the question that’s being discussed on the Interwebs after photographer Michael Wolf was given honorable mention in this year’s World Press Photo contest for a series of photographs made using Google’s Street View. “A Series of Unfortunate Events” contains photographs created by Wolf of unique scenes found in Google’s street imagery, which is captured by Google using special camera-equipped vans driven down streets.


Wolf has been working with Google Street View for the past year, and doesn’t simply take digital screenshots but actually creates photos. He tells BJP:

I use a tripod and mount the camera, photographing a virtual reality that I see on the screen. It’s a real file that I have, I’m not taking a screenshot. I put the camera forward and do an exact crop, and that’s what makes it my picture. It doesn’t belong to Google, because I’m interpreting Google; I’m appropriating Google. If you look at the history of art, there’s a long history of appropriation. [#]