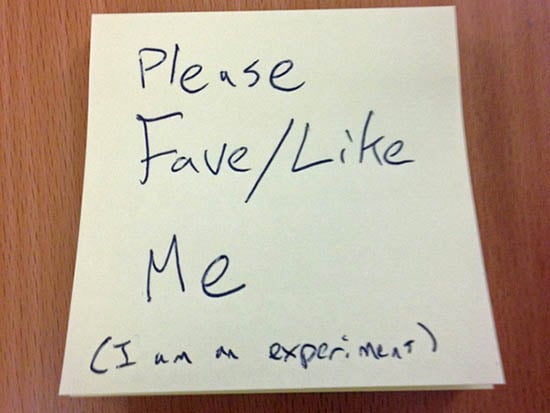 Flickr users have made quite a commotion in the past couple days begging new Yahoo CEO Marissa Mayer to make the photo sharing site “awesome again”, but how does one go about doing so? Mat Honan of Wired says that one of the site’s big weaknesses is user engagement, and conducted a test to prove his point:

I wanted to test out this notion. So at 3 p.m. on Tuesday I took a photo of a sticky on my desk and uploaded it to several photo-sharing services — Instagram, Flickr, Facebook, Google+, Twitter and Path. And just for kicks, I also uploaded it to MlkShk as an afterthought, almost a half hour after all the other platforms. MlkShk is a site with only about 20,000 users, but it’s a very engaged community.

[…] By the next morning Twitter was at 66, Facebook at 51, Instagram at 57, MlkShk at 46, Google+ at 19, and Path stalled out at 2. And Flickr, where it landed on the site’s “Explore” page that highlights the most interesting photos of the day? 23. Perhaps more damning than the poor showing in terms of up votes was how ignored it was in real-time. It was only even viewed a total of five times on Flickr in that first hour.

Online retailer Woot did a similar (unscientific) test earlier this month and also found that Flickr lagged behind the other social networks in terms of how engaged its users are.