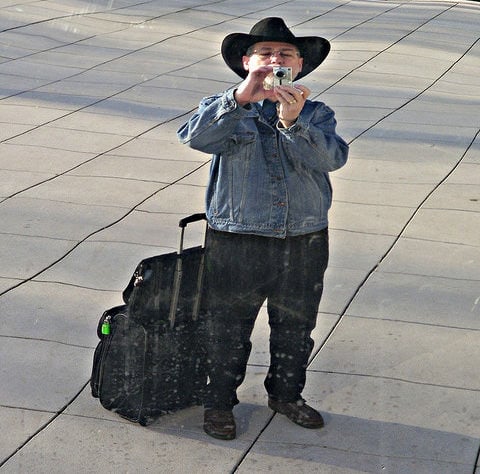 A week ago, a short TED talk by Duncan Davidson called “Why do we hate seeing photos of ourselves” went viral in the blogosphere. While I agree with Duncan’s main premise that part of the issue is that we are used to seeing a mirror image of ourselves, I think it goes deeper.

Some of the responses to the post touch on more issues, such as the image being static and missing “micro-expressions.” I agree with those, too. But I think the static image and micro expressions are more related to the retouching that we do. In real-life interactions we don’t notice little zits, scars, pores, etc. as the face is moving and our eyes are moving around the face of the person we are talking to. In the captured still all of these things stand out to us in a big print, but I don’t think we see that much detail in the small image on the back of the camera that is referenced in the video.

I think there is another issue that wasn’t brought up in the talk or the comments. That is the camera-to-subject distance. As photographers, we are constantly instructed to be at least 36 inches from our subject. Many instructors tell us to be 5 feet or 6 feet away. This is supposed to give a “better” or more pleasing perspective. And that may well be so.

In many of our social interactions we are probably around 2 to 3 feet or more away from the people we are talking to. At least in the US culture. Yes, there are cultures where it is more common to be only inches away from the people you are talking to. But I don’t have experience photographing in those places. I’d be interested in hearing from people who do usually stand “in each others’ face” about how subjects react to seeing their photographs. In the case of most of the subjects I work with, we are used to seeing other people from a bit of a distance. 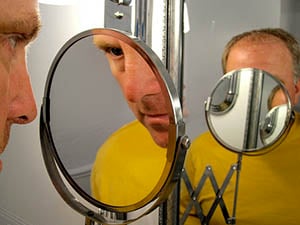 But how do we see ourselves? I usually see myself in the bathroom mirror. How about you? Today I measured the distance from my eye to the mirror when I’m standing at the sink. That was 21″. I checked with my wife, Kim, and she said she is usually looking in a makeup mirror. We went and measured and found she was 9″ from the mirror.

When it comes to perspective in photography, the closer you are to your subject, the more narrow their face will appear. When you are just inches away from your subject their nose is relatively much closer to you than their eyes and ears. The ears seem farther away, making them smaller and making the face seem narrower.

So, my additional premise on this is that we all seem to look heavier to ourselves in photographs that are taken from greater distances. Other people will think the photo looks good because they are used to seeing us from those greater distances. And in a mirror we are always looking at ourselves at eye level. The woman in Duncan’s photo was also photographed from above. She probably has never seen herself in a mirror from that view.

A few weeks ago a question came up on Quora that I was compelled to reply to. It was about why the camera “adds 10 lbs.” to people. You can read my response there.

Here are some photos to help illustrate. All of them were taken with the same lens (Canon 24-105mm) set to 24mm at different distances, from 18″ to 60″ (measured from the mannequin’s right eye to the focal plane mark on the top of the camera). They were then cropped so that the face is approximately the same size in each frame… 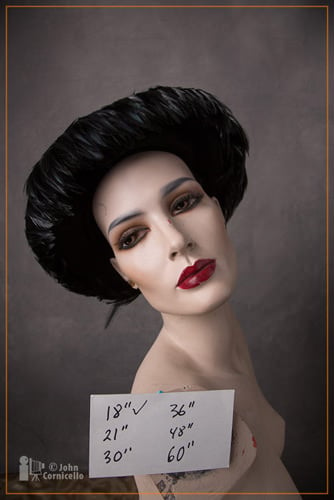 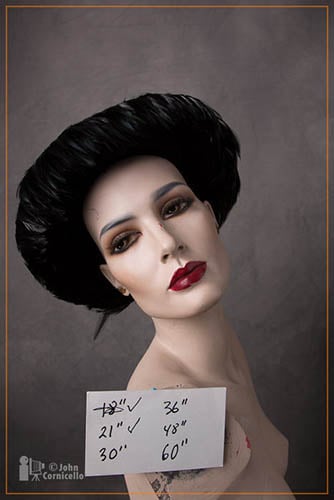 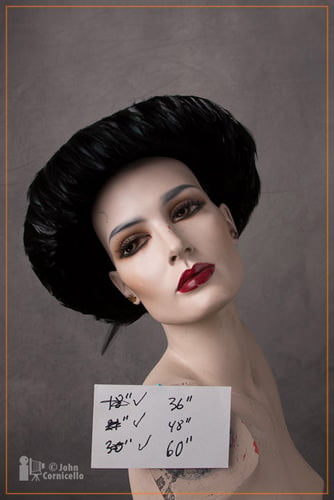 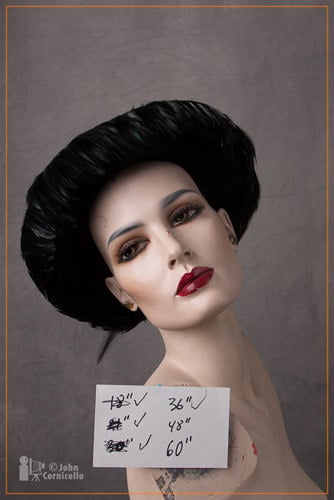 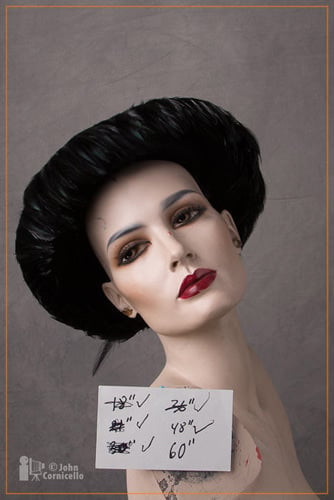 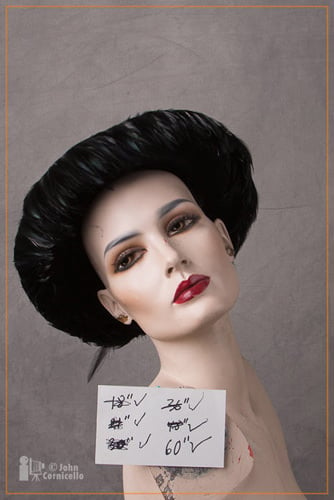 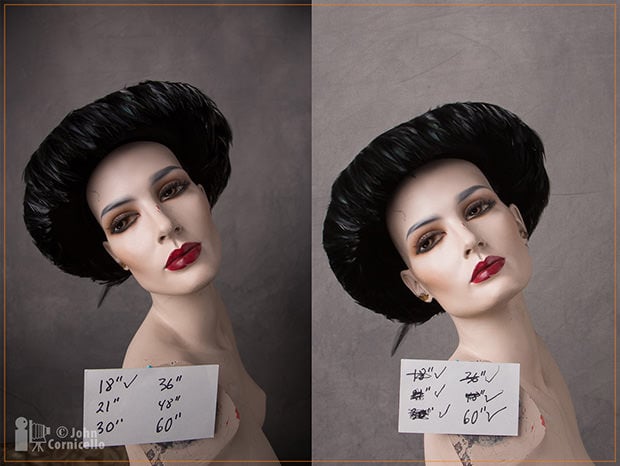 I think you will agree that in the closer photos taken at 18″, 21″, and 30″ make our subject’s face appear thinner. This is how you would see yourself in the mirror. As we then move back to 48″ and 60″ away the face starts to flatten out and look a little heavier. To someone really concerned about their appearance, it might see more than a little heavier. That extra 10 pounds that we get from being further away.

As noted, all the above images were taken with a 24mm lens. This is to show that it isn’t the lens that does this, but is instead the camera-to-subject distance. Don’t blame the lens!

You may be asking yourself about the difference in the appearance of the backgrounds. The lighting is the same (a Westcott Apollo Orb on camera left with a home-made crinkled aluminum foil covered reflector on the right). What is different is that from the greater distance we are only seeing the middle of the backdrop right behind the mannequin’s head. When in closer the field of view is wider and we are seeing the edges of the backdrop and see the falloff of the light. Here is a quick diagram to help explain the field of view…

To help illustrate that this is not lens focal length related, this next image was taken by zooming the lens to 105mm without moving the camera after the 60″ image from above. You will see that the perspective is exactly the same as in the 24mm at 60″ image above. 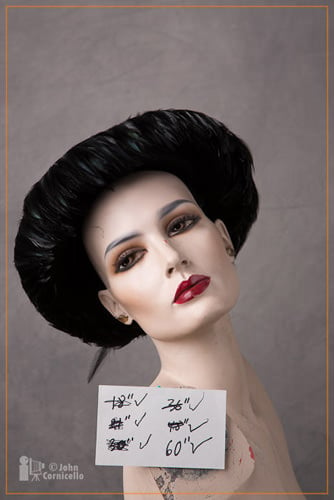 Here they are side-by-side and then overlayed on each other in Photoshop in Difference mode. 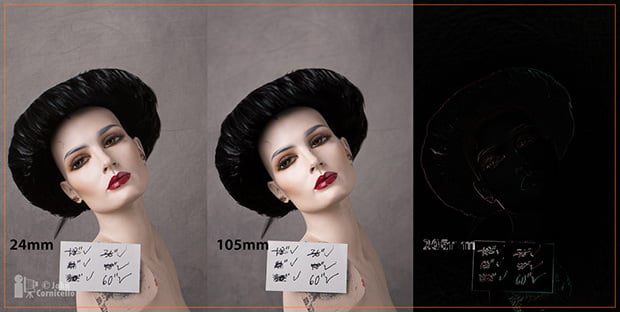 Here is a little experiment for you the next time you are standing in front of the bathroom mirror. Lean in real close to the mirror and study how your face looks. Then slowly pull back away from the mirror while carefully observing the look of your face. Notice that the perspective flattens out as you back away, which gives the impression of being slightly wider, which we translate into appearing those ten pounds heavier.

And one more question… Do you like photos you take of yourself with your phone camera? What is the distance you can hold your phone away from your face to take those photos?

About the author: John Cornicello is a photographer based in Seattle, Washington. Visit his website here. This post was originally published here.