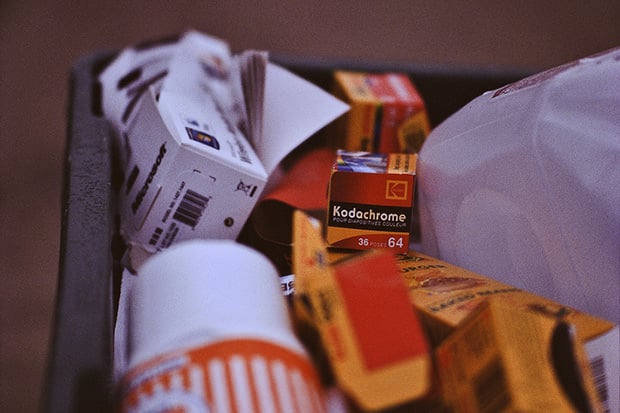 Like everyone else who heard that Kodak was discontinuing Kodachrome in 2009 — and that Dwayne’s Photo would not develop the slide film after 2010 — I shot as much Kodachrome film as I could acquire, before that “last developing day” deadline.

Eighteen months after that final day, people have still tried to develop Kodachrome on their own. It’s photographic alchemy. And after much trial and error, I came up with a way to not only shoot Kodachrome film, but produce color images with it.

It’s April 25, 2012. Thanks to an eBay auction, I have an unused roll of Kodachrome 64 35mm film in my possession. I packed the Kodachrome in my Nikon F100; and for all photos that were taken with this roll, I used my Nikkor E-series 28mm f/2.8 manual focus wide-angle lens. I mounted the camera on a sturdy tripod, and set my camera for shutter priority, shooting as if the film was an ISO of 50, rather than its printed ISO of 64.

Kodachrome can actually be developed as a black-and-white film, and if you’re going to use Kodachrome in that manner, one company that I recommend for developing is Film Rescue International, a respected photo developing company that specializes in pulling pictures from vintage film. I sent my roll of Kodachrome film to FRI; they confirmed its receipt by e-mail, and let me know when the film would be developed and how soon I would receive it back.

On July 12, 2012, the developed film arrived in my mailbox. I checked the negatives. There’s images on them. So if nothing else, I’ve got black-and-white Kodachrome photos.

Here’s an example of Kodachrome as a B&W analogue film. As you can see, this photo includes information regarding the 2012 horseracing season at Saratoga Race Course in upstate New York.

Now here’s that same picture, with a scan that shows the sprocket holes. And if you look at the top of the film strip, right next to the sprocket holes, is the designation “KR 64″ – the abbreviation for consumer-grade Kodachrome 64 ISO film.

Here’s what I came up with. This is the Jericho Drive-In theater in Glenmont, New York. As you can see, the twin bill on the marquee is “American Reunion” and “21 Jump Street.” Kodachrome film, photographed last April. This is a street sign in Saratoga Springs, N.Y., named for race horses Funny Cide and Bird Town. This is an Albany, N.Y. neighborhood grocery store, complete with a vintage sign advertising lottery tickets and money orders.

Yep… all of these are Kodachrome shots. They were not created by that Kodak EasyShare camera that has a “Kodachrome” setting on it. I didn’t sit there and digitally hand-paint these pictures. This is not some other brand of film that I’m calling “Kodachrome” just for laughs and snickers.

Of course, I still have to work on this technique some more – for example, if I ever photograph the sky in this new Kodachrome technique, it has to be a cloudless sky, unless I want clouds that look like they were made of cotton candy. And this roll of film does have some fogging in it, which makes me suspect that this batch of Kodachrome was about to spoil.

And although trying to get a color photo with Kodachrome film in 2012 is almost like making a right turn with three lefts, I still was able to use some filters and ingenuity to produce color photos from this Kodachrome film.

About the author: Chuck Miller is a writer and photographer from Albany, New York. In addition to shooting traditional film and digital images, he has experimented with various lo-fi and non-traditional photographic techniques, and blogs about his successes and “back-to-the-drawing-board” attempts on his Albany Times Union blog.

Image credit: Remains of the Day (in Kodachrome 25) by ageing accozzaglia

Dizzying Animations that Show What San Francisco Looks Like to Superman