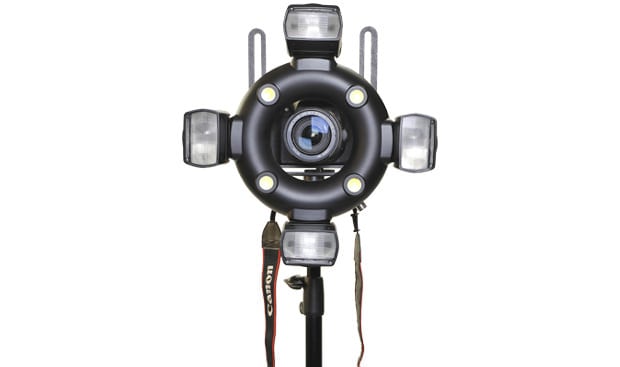 Okay — maybe it’s trying to reinvent the wheel, er, ring flash, but this could be an interesting gadget: Chinese company CononMark has unveiled a flash system that looks like a cross between a ring flash, speedlights, bracket flash and modeling lights.

Some of the flash highlights include four LED lights for video lighting or modeling lights, plus the four speedlight-like flash heads that can be positioned independently in different directions. The flash heads also include diffuser panels and bounce cards. Finally, the flash has a wireless triggering system via a transmitter that mounts on the hot shoe. It looks like it could be a versatile system with a lot of flash types packed into one device — though if you already own a ring flash, speedlights and brackets — it may be redundant or make more sense to own the items À la carte.

The CononMark iQ was presented at the Shanghai Photo & Imaging trade show this month, according to Lighting Rumors — and no word on the price or availability yet.

Common Photography Mistakes Made by Beginners Back in 1902