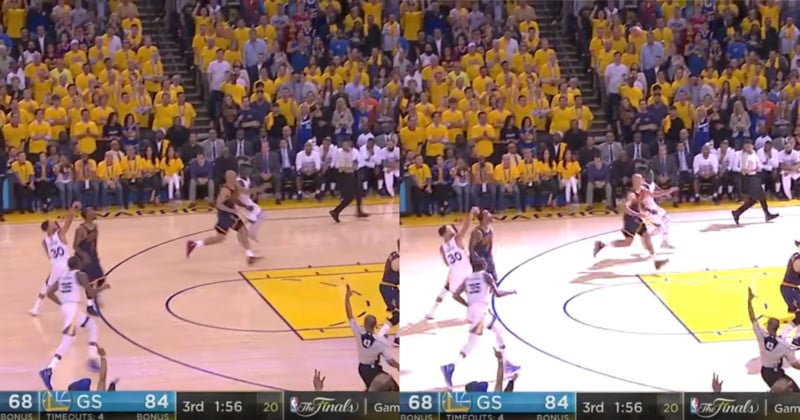 Here’s something you might not be able to “unsee” if you’ve never noticed it before: during an NBA basketball game, whenever there’s some exciting action around the rim, there’s a good chance you’ll also see a bright flash of light illuminate your screen for a split second. These are the powerful strobes installed high overhead by photographers.

What you can do with these strobes was featured prominently after the recent Game 1 of the NBA Finals between the Golden State Warriors and Cleveland Cavaliers. The NBA shared a gorgeous set of photos by photographer Garrett Ellwood, who exposed some of his photos with a creative “spotlight” style. Here’s a small gallery the NBA posted on its Instagram account:

The spotlight shines on Game 1 of the #NBAFinals!

But one photo from the night that has a lot of people talking is this one shared by Ellwood on his personal Instagram:

One photo enthusiast took to Twitter to ask the photography community on /r/photography how this kind of photo is made, sparking a lengthy discussion.

“Just wondering how these photographers capture images like this, when there’s bright lighting the entire game?,” writes Redditor gussypoo. “Is it more settings, post, or both?”

The explanation is that sports photographers set up powerful strobes in the rafters and corners of arenas, as photographer Patrick Murphy-Racey explained in a couple of videos last year.

“Ellwood could have underexposed the background in two ways,” writes DPReview. “First, he could have used a very narrow aperture, or he could have used high-speed sync, or a combination of the two. From there, just pump up the flash power to your desired level, and fire away.”

The powerful flashes during games aren’t exactly stealthy: they’re very noticeable during broadcasts, but your brain may tune them out because you’re so focused on the action itself.

For his photos, Ellwood needed to overwhelm the already-bright lighting of Oracle Arena. Redditor rrgrs found the exact moment Ellwood’s photo was exposed in a highlight video, and you can definitely see how bright the strobe is in two frames before and during its firing:

Here’s a short clip showing what the flash looked like during the TV broadcast:

You can also see how noticeable the flash actually was in this highlight clip by the NBA showing the same play from different angles:

Take a look through the NBA’s archive of game highlights, and you’ll find that these bright flashes are nothing new. Even Michael Jordan’s highlights are full of them.

My Model Triggered a Lightning Self-Portrait, And She Nailed It