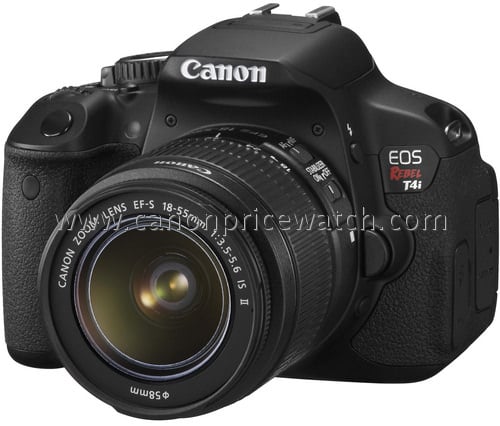 Fresh off the press: Canon Price Watch just put up the first images of Canon’s up and coming T4i — which is rumored to drop this Friday. Interestingly enough, Canon Price Watch seems to think that the new Rebel will be announced tomorrow, a day earlier than expected, alongside the rumored 18-135mm IS STM and 40mm f/2.8 pancake lenses.

Unfortunately, the pictures don’t come with a set of confirmed specs, but the rumored specifications as they now stand have the T4i sporting an 18-megapixel sensor (fingers crossed the sensor has at least been updated from the T3i), touchscreen LCD, 9 AF points (all cross-type), and continuous AF during live view and while shooting video.