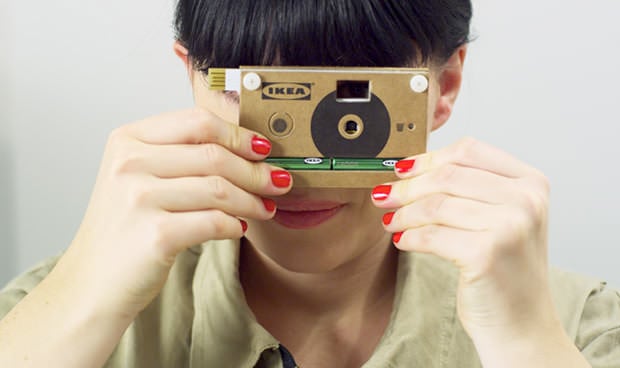 Yesterday I attended a VIP sneak preview of the new IKEA PS designer furniture line in Malmö, Sweden. I was not the slightest bit interested in the designer furniture. I was there for one reason, to play with and acquire the new KNÄPPA, IKEA’s cardboard camera.

The event started with everyone getting a big yellow sticker to put on their chest, a sort of VIP stamp á la IKEA, if you will. After waiting for everyone to arrive, the IKEA people announced that we could move on to the area they’ve prepared with all the furniture. On our way there, IKEA staff handed us small gift bags. This is where I knew the camera was going to be. I was ecstatic. I look down and there it is. Wrapped in classic folded IKEA carton.

They then presented us with a different assortment of food and snacks while one of the staff members showed us how the camera was operated. 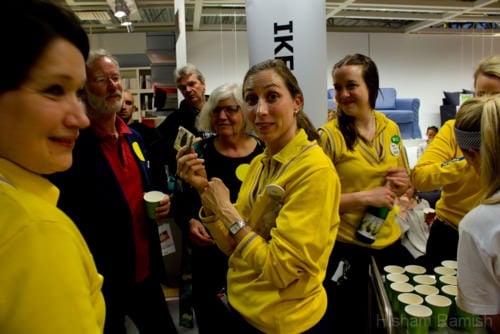 They had a small presentation of all the furniture and they then let you off to roam around.

During this time I asked the staff about the camera. They told me that the camera was NOT going to be sold to the public, and that it was just made to promote this new line of designer furniture (great marketing tactic if you ask me).

After this, I quickly went home to start shooting.

Now, about the actual camera.

It is made of thick cardboard wrapped around a piece of PCB plastic. 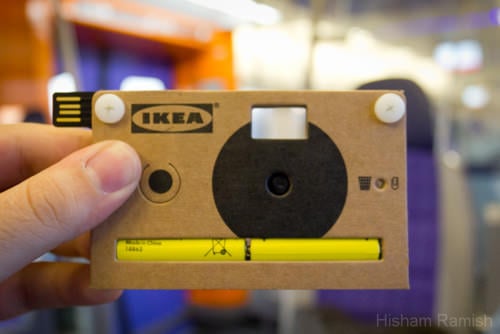 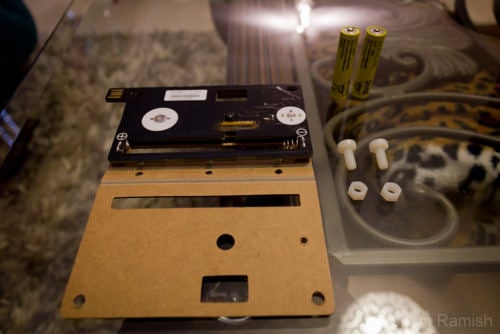 There’s two buttons in the front, the big one for turning on/taking a photo/turning off the camera (more on that later) and a small one to delete the photos from the device.

On the back there’s a small green LED light indicator and the small vinyl bolts and nuts to keep the camera together.

On the side of the camera there’s a male USB connector. 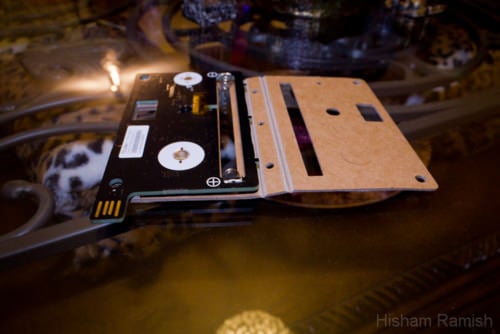 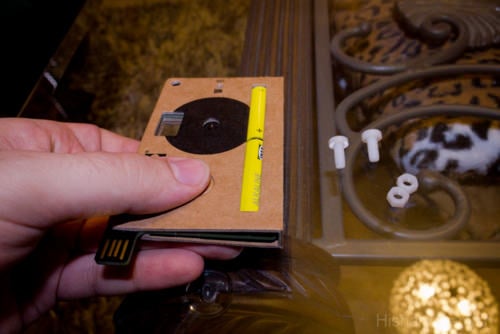 You then put the bolts/screws in to the mounting holes and screw the nuts on. 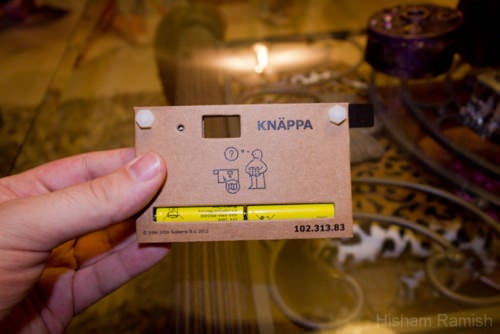 Well to actually get to the photos you need to plug the camera into a USB port. When you first connect it, Windows 7 automatically installs the drivers. If you haven’t taken any photos, you’ll find two files in the 15.3MB drive. One is a photo. 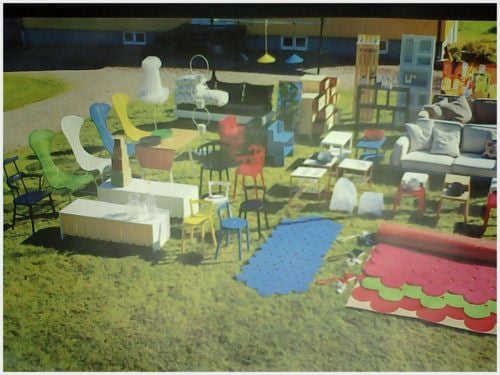 This is a photo of all the products in the IKEA PS line.

The second file is a README file from IKEA.

Now as you can see from the photo above, the quality is not that great. Its like a camera phone from 2006. Here are more examples: 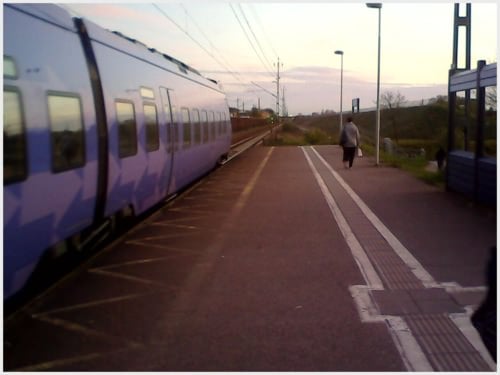 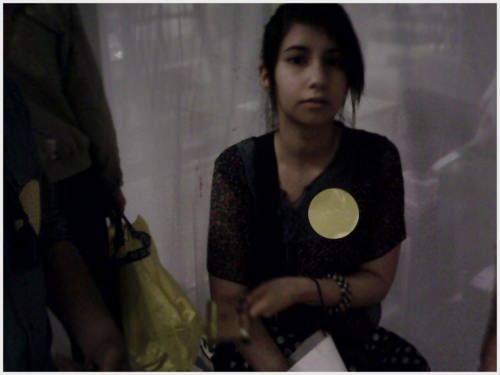 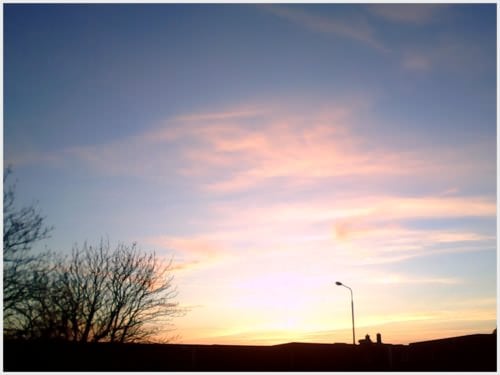 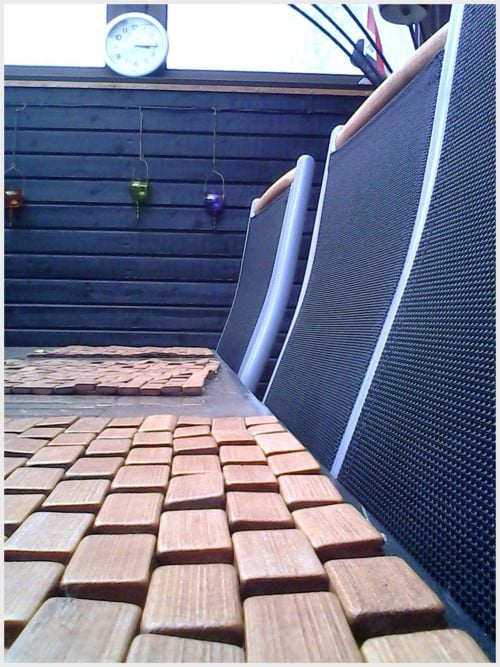 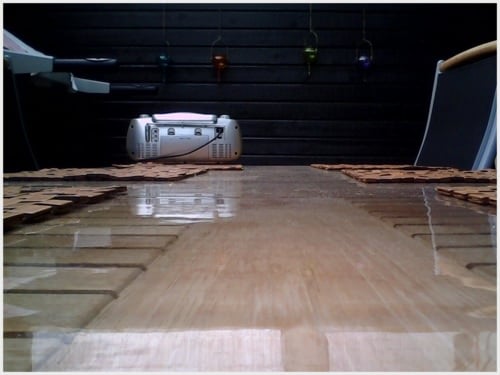 You can get quite decent photos if you manage to keep the camera steady and the scene well lit. The shutter of the camera is slow, so you’ll need a steady hand.

In conclusion, this is essentially a digital pinhole camera. But there’s something extra about it, it has that certain feel. It’s not a Leica — it’s made out of friggin cardboard! But even though it’s cardboard the build quality of it is surprisingly robust. Image quality isn’t always everything nowadays. I would love it if IKEA started selling these. It would gain a big following.

I know this review is somewhat long, but I hope you’ve gotten something out of it!

About the author: Hisham Ramish is a photo enthusiast living in Sweden. You can visit his blog here. This post was originally published here.

Teen Collects 50,000 Signatures to Protest the Use of Photoshop by Magazines