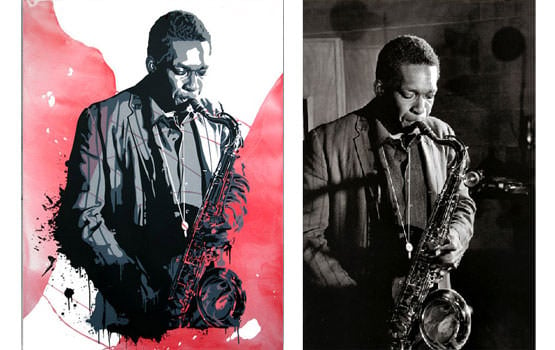 If you’ve been following us for a while you may remember the Hope poster lawsuit we reported on in January of 2010. The case pitted artist Shepard Fairey against the AP and Mannie Garcia over a photograph Garcia had taken of President Obama. Fairey, who ultimately lost the case when he admitted to having destroyed and falsified evidence, was claiming that his poster fit the definition of fair use.

Today we have a similar issue of photographs that have been altered artistically, only the players have changed to music photographer Jim Marshall’s Estate vs. Thierry Guetta (Mr. Brainwash) and Google.

Marshall’s estate is accusing Guetta and Google of using the famous music photographer’s work without authorization in a promotion for Google Music. The photos were used as a backdrop in a Google Music promotion and although, much like the hope poster, the photos were rendered artistically, there is no doubt the images are Marshall’s.

To add insult to injury, Guetta is also accused of creating other derivative works using Marshall’s photography that he is actually selling on his website. Google and Guetta have yet to comment (although, to be fair, Google is claiming that they haven’t received the complaint yet and are only witholding comment until they do) but this isn’t the first time Guetta has been in trouble with photographers. He’s currently in the middle of another suit by photographer Dennis Morris, and already lost a case in June of 2011 against photographer Glen E. Friedman.

We said it in 2010 and we’ll say it again: The moral of the story? Get permission folks!

Butterfingered Photographers Being Sued for $300,000 by Art Collector