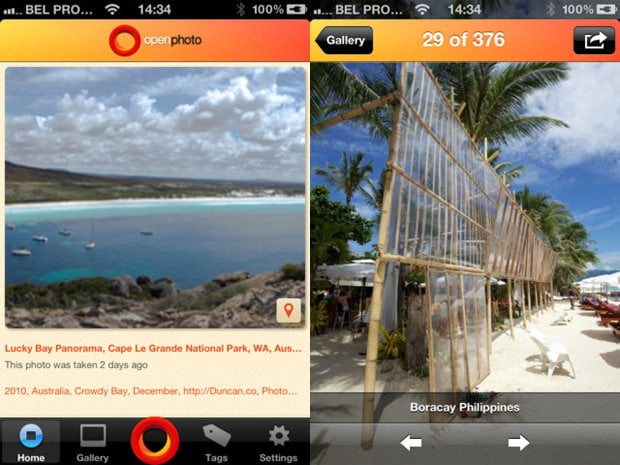 Photo sharing apps for smartphones are a dime-a-dozen. Ever since Instagram achieved worldwide success — and was rewarded with a $1 billion dollar buyout by Facebook — many developers have tried to follow in their footsteps. That being said, finding a photo sharing app that stands out is rare, which is why the OpenPhoto app release this week struck a chord with us.

We first reported on OpenPhoto when it was still a lowly Kickstarter campaign back in June of 2011, and at the time it was touted as an open source Flickr killer (the source code of the project is available on GitHub). Since then, the folks at OpenPhoto have been hard at work, finally releasing an iPhone app that at the time was only an “if we get enough funding” promise. If the web app was taking on the likes of Flickr, the iPhone app offers the same challenge to Instagram-like mobile apps.

Unlike those applications, OpenPhoto doesn’t tether you down to its own servers. Photos that you take using the app can be stored directly on your Dropbox account, Amazon S3 account, or any other cloud storage service. You can still share, comment on, and tag photos just like with any of its competitors; OpenPhoto simply gives you a choice regarding where you backup and store those pictures.

According to The Verge, the app still has a long way to go in the ares of editing and social networking; but the idea is there, and over time we may see OpenPhoto grow into a new breed of photo sharing mobile application. After all, it started as a web app and it’s already reached smartphones; who knows what’s next.

OpenPhoto for iPhone (via The Verge)

Satellite Photographs Showing the Rapid Spread of Humans Across the Earth