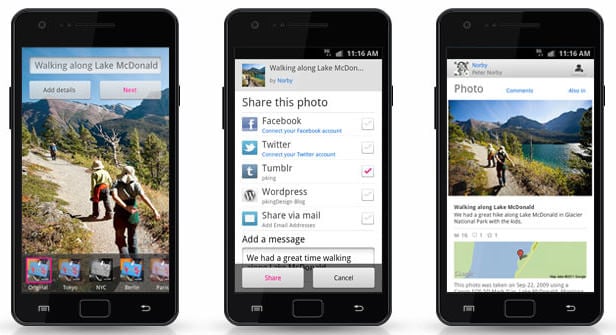 If you’re a Flickr loyalist that hasn’t jumped ship for competing services, Flickr is rewarding you with a couple new tools for sharing your photos. Today the company announced an official app for Android and a new photo-sharing feature called Photo Sessions.

The new Flickr app for Android is designed to compete against other popular photo sharing apps — namely Instagram — by not being limited to Flickr. Instead, users can take pictures and share it across many different services including Facebook and Twitter. They’ve also jumped onto the retro bandwagon by providing different filters for altering the look of your photos.

Photo Sessions is a feature for viewing images in real-time with friends and family. Simply start a new session and invite your friends to start looking at pictures, chatting about them, or drawing on them. The feature is also available for iPhones and iPads.

If Flickr can continue this trend of regular updates, then maybe they do stand a chance against the new upstart photo-sharing services and apps…